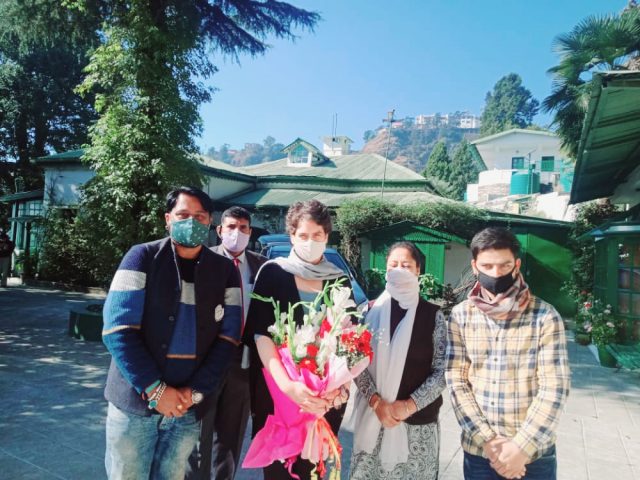 By Our Staff Reporter
Mussoorie, 8 Nov: Priyanka Gandhi Vadra, National General Secretary of the Congress, left for Delhi by road, today, amidst heavy security. Before that, Mussoorie Congress President Gaurav Aggarwal, Mussoorie Mahila Congress President Jasbeer Kaur, Mussoorie constituency Youth Congress president Wasim Khan and NSUI President Jagpal Gusain greeted her with flower bouquets.
Addressing Congress workers, she instructed everyone to work on strengthening the party.
Speaking to media persons, Jasbeer Kaur revealed that Vadra called upon all the workers to keep their morale high for the 2022 election. They ought to spread the traditional policies of the Congress from house to house. She claimed that the Congress had done well in the Bihar elections and it was clear that the Modi wave was ending in the country. She revealed that the party General Secretary was confident that people would hand over the key of power to the Congress. Vadra also praised the natural beauty of Mussoorie and urged the state government that to take concrete steps to preserve it. She claimed that when there would be a Congress government in Uttarakhand, work will be done to make Mussoorie more beautiful. Plans would be made to connect to boost employment.