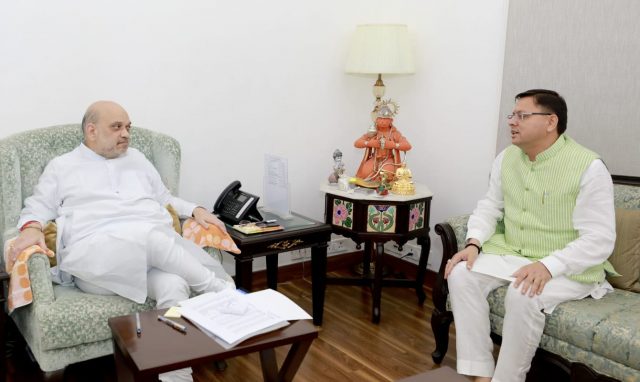 Dehradun, 21 Sep: The much awaited meeting between Union Home Minister Amit Shah and Uttarakhand Chief Minister Pushkar Singh Dhami finally happened in New Delhi this afternoon and lasted about an hour. Officially, the discussions were held on the state’s disaster management and the action taken by the state to mitigate such disasters, but sources in the party claimed that both the leaders also discussed political situation in Uttarakhand in the wake of recent scams related to recruitments done by UKSSSC as well as irregular recruitments done by various Speakers in the Assembly Secretariat that have dented the state’s image across the country.

Sources further reported that Shah had sought feedback from Dhami on both the issues and the political ground realities in their wake. The party is concerned about the effect the issues may have on the next general elections.

At present BJP holds all the 5 Lok Sabha constituencies in the state and is stated to be “serious” about retaining all the seats from the state. Uttarakhand has always been a politically crucial state for the BJP.

It is also reported that a discussion was also held on a possible cabinet reshuffle and filling up of the three vacancies in Dhami’s Council of Ministers.

It may be recalled that, yesterday, Dhami had also visited BJP Headquarters in New Delhi to meet certain party seniors and also Rajya Sabha MP Anil Baluni at his official residence in New Delhi.

Sources claim that a possible reshuffle could be held during the Navratri period beginning on 26 September and culminating on 5 October, which is Dusshera. At the same time, Dhami may also induct more ministers to fill up the vacancies though that is something that remains to be seen.

Garhwal Post has established itself as a credible, balanced and forward looking newspaper in India. Based in Uttarakhand, the daily is read by the aware, socially and culturally responsible, high-income elite of society.
Contact us: info@garhwalpost.in
https://garhwalpost.in/interracial-relationships-definition/ free hook up calgary https://garhwalpost.in/55-and-older-dating-site/