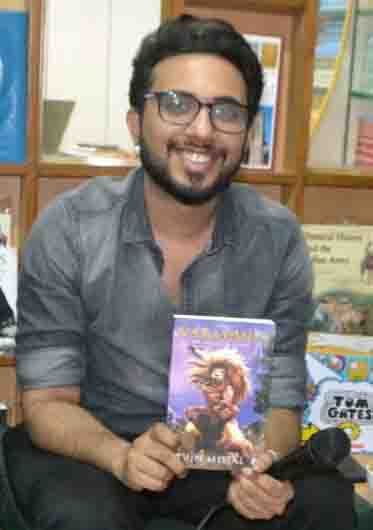 By OUR STAFF REPORTER
Dehradun, 16 Jun: The Booknerds and ‘The English Book Depot’ collaborated to host bestselling author Kevin Missal for the launch of his latest book, ‘Narasimha: The Mahaavatar Trilogy Book 1’. It was an evening brimming with mythology, fantasy and literary delights.
Kevin Missal wrote his first book at the age of 14, and at 22, the St Stephen’s College, Delhi, graduate is a bestselling author and a full-time writer, with the first two books in his Kalki series being runaway successes. ‘Dharmayoddha Kalki: Avatar of Vishnu’ and its sequel, ‘Satyayoddha Kalki: Eye of Brahma’, have sold one lakh copies in under a year. Kevin loves fantasy fiction and has always been a fan of mythology. His books have been featured in publications like The Sunday Guardian, The New Indian Express and Millennium Post.
The moderator for the evening was Himadri.
The discussion was led by Rohan, who posed some candid questions but Kevin answered them all with aplomb and explained how a contemporary writer has to be involved with everything from creative book cover design, social media campaigns, to building a great relationship with editors and publishers, etc. He said, “I write because I want to convert non-readers into readers”.
On being asked by other bibliophiles about his foray into writing mythology and fantasy, he said, “I am a huge Star Wars fan and always wanted to render the same storyline treatment to Indian mythology.”
When Rohan enquired about why he chose to write about Narasimha, Kevin said, “I happened to write on Narasimha when I realised he’s the angriest Avatar of Vishnu. The more I researched about him, the more he became layered and complex. Did you know he had a wife? Did you know he was a devoted husband? It made me think that people know only the Narasimha they have read about in populist stories and not the one that came prior. So I happen to write on him.”
He also mentioned that his father played a humongous role in his being inspired to write in the genre.

Garhwal Post has established itself as a credible, balanced and forward looking newspaper in India. Based in Uttarakhand, the daily is read by the aware, socially and culturally responsible, high-income elite of society.
Contact us: info@garhwalpost.in
iceland women dating