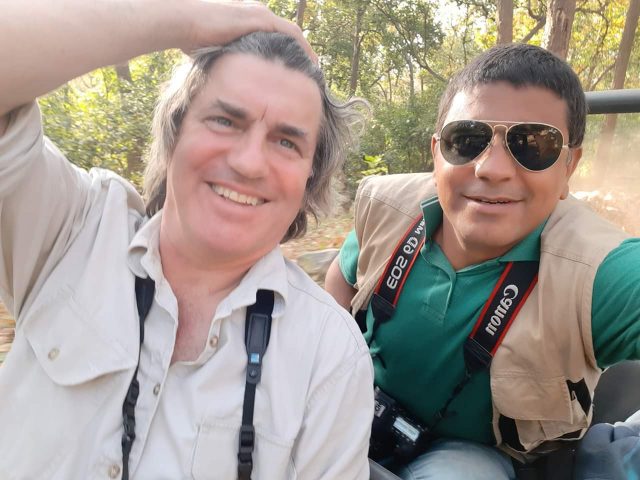 Pawan Negi with documentary anchor and wildlife campaigner Martin Hughes-Games during the shoot in Chilla.

Dehradun, 4 Aug: For Pawan Negi, the young Doon-based photographer and videographer of Dehradun, 7 August will indeed be a special day. He was part of the team of ‘Counting Tigers’, the documentary which is to be telecast on National Geographic Channel and Hotstar on this day at 8 p.m. Negi was the only one from Uttarakhand to be part of this significant project that will reveal to viewers the entire operation that lies behind the process of tracking and counting tigers for the census. It is the process of the 2018 Tiger Census that has been captured in this documentary. Talking to Garhwal Post, Negi said that he worked at the project for a month and found it the most thrilling experience of his career. “Despite the fact that we had to follow all norms strictly, it was truly exciting!” he declared while recalling his stay in Dhikala, Motichur and Chilla zones of the protected area. He said that the last he had gone to work for the documentary was in April 2019. “There were, of course, many camerapersons. I was the only one from Uttarakhand,” he pointed out, beaming with pride. It may be mentioned here that on 29 July – International Tiger Day – Prime Minister Narendra Modi released the All India Tiger Estimation Report 2018 and affirmed that India had emerged as one of the biggest and safest habitats for tigers in the world. The documentary focuses on all the efforts made by officials and forest guards during the tracking and counting of tigers. It also shows the challenges of the massive exercise. This documentary is being premiered over National Geographic and Hotstar on 7 August. This will be the first episode of the documentary. Around 15,000 camera traps were used while shooting this documentary, which has been made by the London-based Optimum Television Company. The documentary shows the current habitats of tigers in India and tells us about the various stakeholders involved in tiger conservation in our country. The census reveals that India has 3000 tigers and is, thus, one of the biggest and safest habitats for them in the world. The documentary is, in a way, also a celebration of the wildlife and forest officials who work around the clock to save the tiger. It similarly acknowledges the efforts of the other staff members as well as villagers of the surrounding areas. It also has an in-depth profiling of the majestic animal. Dr YV Jhala of Wildlife Institute of India was part of the team of Counting Tigers. He is one of India’s most outstanding field biologists The documentary will provide viewers worldwide with the great adventure that tiger counting can prove to be. How the entire exercise is undertaken without disturbing the wildlife and how utmost care is taken to follow all norms. The thrill of watching a tiger in the wild is something one can never get over. The counting is done every four years. The wild population of tigers increased over 33 per cent in four years (2014-2018). In the past ten years, India has created around twenty-four new reserves to give space to tigers. It is indeed heartening to know that a young cameraperson from Dehradun was an important part of the team that was documenting tiger counting for the entire world to watch and enjoy. Pawan Negi has done Uttarakhand proud!