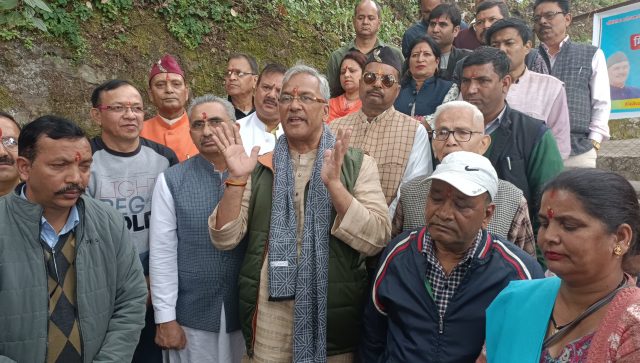 Mussoorie, 4 Nov: Former Chief Minister Trivendra Singh Rawat launched the campaign, today, to revive the Rispana River, under the auspices of the Devbhoomi Vikas Sansthan, at the origin of the river near Woodstock School, here.

He appealed to all the people to ensure their participation in transforming the Rispana River into ‘Rishiparna’. A large number of BJP workers welcomed Rawat with bouquets at the origin of the Rispana River.

Rawat walked up the difficult path to the origin and offering prayers on the occasion. Interacting with journalists, he said that the need is being felt to carry forward the earlier efforts of the organisation on Rispana’s revival. He asserted that, in the present day, nothing is impossible. There are many scientific ways in which the Rispana River can be revived to its past glory. Important work has been done already to achieve the goal, including plantation done on a large scale. The effect of this is could be seen today. Animals and birds are also now being seen in larger number the area, which is a good sign.

Rawat added said that the Saung Dam Drinking Water Project would also give life to the Rispana River.

Gravity based drinking water will be available 24 hours to Dehradun district from the Soung Dam to be built in Saundhana village of Dhanaulti assembly constituency of Tehri district. Excess water would be released into the Rispana River. This initiative would give new life to Rispana. The life of the dam project would be one hundred years and it would continue to supply water till 2123. The dam would ensure water supply to the Rispana for all 12 months. The assessment team was constituted under the supervision of IIT Roorkee and in its report it was stated that there has been a big improvement in the water quality of the river.