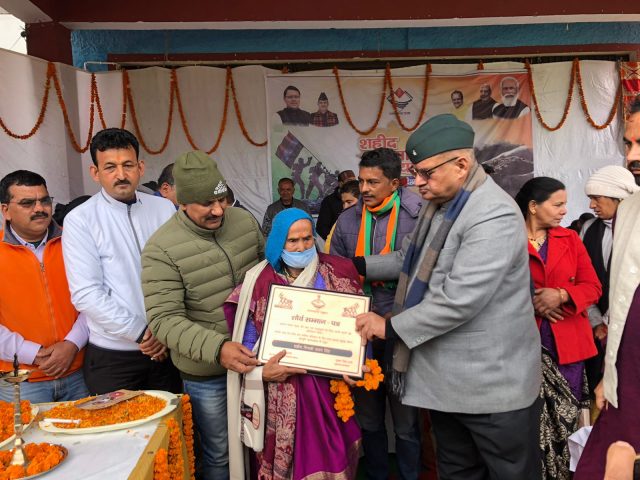 DEHRADUN, 1 Dec: Under the Shaheed Samman Yatra programme, the families members of 57 immortal martyr soldiers of Champawat were presented with Anga Vastram and Tamra Patras by Sainik Kalyan Minister Ganesh Joshi today. On this occasion, local MLA Puran Fartyal, District Panchayat PresidentJyoti Rai, District President BJP Deepak Pathak, Nagar President Govind Verma, Prakash Rai were also present. Joshi was the chief guest on this occasion. This function was held at Ramlila Maidan in Lohaghat. The Programmebegan with lighting the ceremonial lamp by the exservicemen and other dignitaries present. Before his address, Ganesh Joshi paid tribute to the martyr families by offering flowers on the earthen pots containing soil from the houses of the martyrs. Addressing the gathering, Joshi said that many martyrs from Uttarakhand had sacrificed their lives to protect the country. The nation would always remember his sacrifice. He said that great brave sons, who sacrificed their lives while serving the country, had brought laurels to the state. He said that the government stood firmly with the families of the martyrs. He said that the government had launched many schemes aimed at welfare of the ex-servicemen, in service soldiers and their families. He said that in this direction, the government was in the process of building a grand military dham in Dehradun, for the construction of which, soil from the houses of the martyrs would be collected and used at the memorial. While thanking the Chief Minister, Pushkar Singh Dhami, he said that an assistance of Rs 50 thousand would be given to the family members of the soldiers to prepare for entrance to the military services through NDA and CDS. He said that soldiers across the country had been demanding One Rank One Pension for a long time, which Prime Minister Narendra Modi had fulfilled and it had greatly benefited the ex-servicemen of the country. He said that the government would also give a government job to a member of the martyr’s families according to his or her qualifications. CDO Rajendra Singh Rawat, Additional District Magistrate Shiv Charan Dwivedi, SDM KN Goswami, Tehsildar, BJP organisation officials, ex-servicemen and others were present in the programme.

Garhwal Post has established itself as a credible, balanced and forward looking newspaper in India. Based in Uttarakhand, the daily is read by the aware, socially and culturally responsible, high-income elite of society.
Contact us: info@garhwalpost.in
single women in my area buckinghamshire singles women seeking men in australia