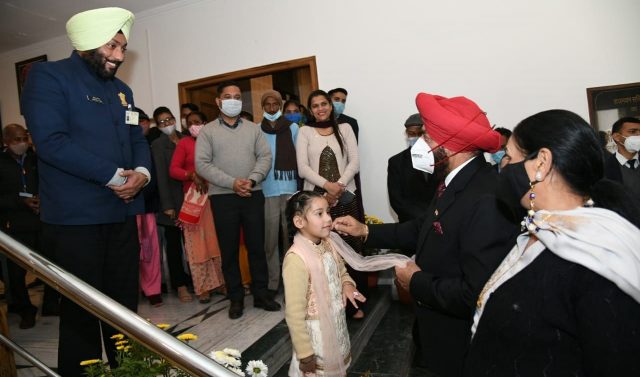 By Our Staff Reporter
Dehradun, 29 Dec: Governor Lt General Gurmit Singh (Retd) met all the personnel and their families of the Raj Bhawan staff, here, on Wednesday. The Governor interacted with the more than 400 personnel and their families. He asked about their personal and official problems. While conveying his greetings to the entire Raj Bhawan family, the Governor expressed the hope that the New Year would bring good health, peace, happiness and prosperity to all. First Lady Gurmit Kaur was also present on the occasion.
Addressing the gathering, Governor Singh said that the dignity of Raj Bhawan is the topmost priority of all. All the officers and personnel should ensure their behaviour and performance is in accordance with it. Raj Bhawan should communicate the essence of Uttarakhand. He announced that, every Saturday, would be an open day for them to raise their problems.
The Governor reminded that government employees should do their work with devotion and sincerity. A corruption-free work style, discipline, honesty, integrity and human sensitivity were the Lakshman Rekha for every government employee.
He announced that, soon, a Family Welfare Centre would be established in the Raj Bhawan for self-employment training to be imparted to the employees’ wives, daughters and women family member. Women Self Help Groups would also be formed.
A computer training centre would also be opened at Raj Bhawan in the New Year for the family members. A Self Defence Centre would also be set up to impart training to women officers, workers, girls and women. Also, 75 types of fruit plants would be planted in the Raj Bhawan premises grown from seeds developed at Pantnagar University. By increasing the number of cows in the Gaushala at the Raj Bhawan, milk would be made available to the Raj Bhavan residential colony on no profit or loss basis.
The Governor urged strict adherence to COVID protocols. People would have to be motivated to follow social distancing, wear masks and maintain cleanliness. Strong discipline and s will to fight against Covid and its new variants was required.
Among those present on the occasion were Secretary Dr Ranjit Kumar Sinha, ADC Rachita Juyal, Major Tarun Kumar and officers and employees of Raj Bhawan Secretariat.