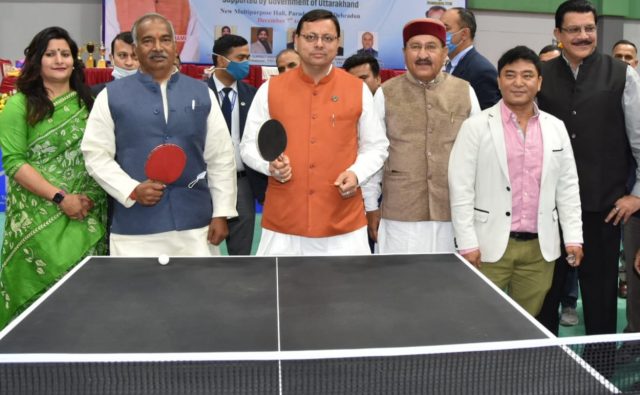 By OUR STAFF REPOTER

DEHRADUN, 7 Dec: Chief Minister Pushkar Singh Dhami inaugurated the National Ranking Table Tennis Competition at the Multipurpose Sports Auditorium at Parade Ground here today. This competition will run from 7 to 14 December 2021. Speaking on this occasion, the Chief Minister said that sports were like a colourful rainbow in everyone’s life, which came out among the dark clouds after rains and gave the message that the world was colourful. He added that sports taught punctuality, patience, discipline, teamwork and perseverance. Playing with team spirit taught everyone to build and improve confidence level. If one practiced sports regularly, he or she could become more active and healthy. 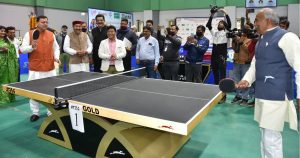 The Chief Minister said that this time Indian players performed better in Olympics and Paralympics. Today the youth was looking at the eco system, understanding it. After the Olympics, the families had started discussing sports and this ought to be encouraged. The Chief Minister said that through the National Sports Competition, where the players got a chance to show their spirit, they also got to know the culture of other states. The state government had implemented “Sports Policy-2021” to promote sports and sportspersons in the state. Through, its ‘Uttarakhand Sports Policy 2021′, the government would promote sports, players’ upgradation, explore and hunt for talent, groom the talent and help them achieve success at the top level. The government would also arrange proper and healthy diet for the sportspersons and also look after their employment to secure their future so that they could focus on excelling in sports without worrying for future. Dhami stressed that provision had been made to provide opportunities and related facilities. Provision had also been made for proper economic incentives to develop national and international level talent among the youth. He said that Uttarakhand would definitely make its mark as a sports state in future. The players of the state would illuminate the name of the country and the state on the national and international stage. The Chief Minister said that the State Government was also determined to set up a Sports University to promote sports in the State. Efforts were being made to make Sports College Raipur as an international level sports university. Khelo India State Level Centre and Sports Science Centre would be established in Dehradun. The process of opening open gyms in every gram sabha of the state under the scheme “SwasthYuvaSwasthUttrakhand” had already been started. Women’s empowerment had been promoted in the state by appointing Vandana Kataria, who performed brilliantly in the Olympics, as the ‘Brand Ambassador of Beti Bachao Beti Padhao Abhiyan’ in the state. The State Government would provide financial assistance to 20 thousand groups for six months to Yuvak Mangal Dal and Mahila Mangal Dal of Youth Welfare and Provincial Development Dal for self-reliance. Sports Minister Arvind Pandey said that all possible efforts were being made by the state government to promote sports. In the new sports policy, all kinds of facilities had been given to the players. Now in the absence of funds, no player would need to beg others for financial assistance. On this occasion MLA Bharat Choudhary, Director (Sports) GS Rawat, President of Uttarakhand Table Tennis Association Chetan Gurung, Secretary Prince Vipon, Ashok Wasu and tournament Director Ganeshan were present.