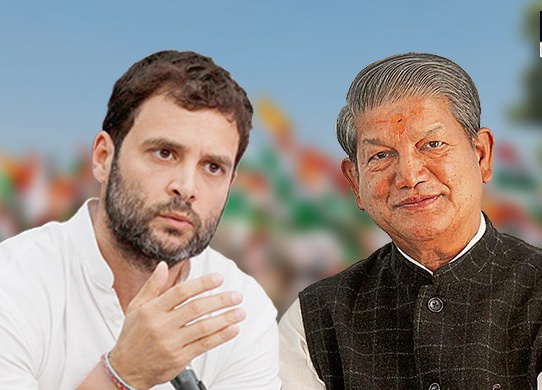 By Arun Pratap Singh
Dehradun, 24 Dec: The Congress top leadership led by Rahul Gandhi spoke to veteran Congress leader Harish Rawat in Delhi today amidst the political turmoil in Uttarakhand. Rawat had attended a pre-scheduled meeting in Delhi on Friday in which several senior Congress leaders also participated. Later, Rahul Gandhi summoned Rawat and after the meeting, former Chief Minister Harish Rawat appeared to have softened his stand over his demand to be declared the CM candidate.
As had been indicated by Garhwal Post, the Congress High Command did not agree to his demand for being declared the CM candidate. However, according to the party insiders, the High Command reportedly agreed to give him a little more free hand in respect of the Uttarakhand elections.
After coming out of the meeting with Rahul Gandhi, Harish Rawat declared that he would be leading the party in the elections but in case of a Congress win, the Chief Minister would be decided only after the elections.
It however remains to be seen if Rawat has received any assurance from the party about replacing the leader in charge of party affairs in Uttarakhand, Devendra Yadav.
Rawat has never been comfortable with Yadav ever since the latter was given charge of the state. For the time being, the crisis seems to have subsided but political analysts l opine that it has certainly dented the image as well as momentum of the party’s campaign for the upcoming state assembly elections.
Along with Harish Rawat, all senior party leaders including state president Ganesh Godiyal, former minister Yashpal Arya, Leader of the Opposition Pritam Singh, MP Pradeep Tamta, former president Kishore Upadhyay had been summoned to Delhi. Meanwhile, the State Congress Committee also postponed all party level meetings and programmes at the instructions of State President Ganesh Godiyal.