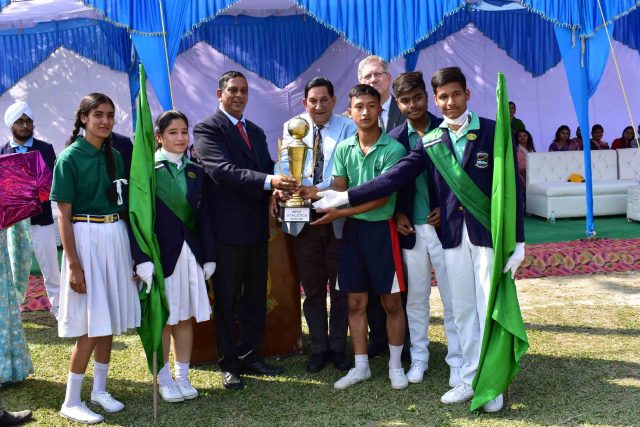 DEHRADUN, 24 Oct: Hilton’s School held its Annual Senior School Sports Day here, today, which was attended by a large gathering of parents, staff and students. World Polio Day, which falls today, was also observed at a special ceremony attended by the President of Rotary Club, Dehradun, Anup Kaul, Chief Guest Bro Jerome Ellens, Principal of Hilton’s School David J Hilton, Anuj Singh and the Interactors of the school. Bro Jerome Ellens, Director of Patrician College for Women, was the Chief Guest. The function started with the inspection of the Houses and the opening March Past. The programme witnessed several field events that included flat races, relays and even some fun races. The participants thrilled the spectators with their energetic performances which included a PT Display by the children of Classes VI to VIII, and an Aerobics display by the girls of Classes VI to X. The Tug-O-War contest was held between Anthony House and Jonas House, which was won by Jonas House. A special race was also held for the support staff of the school. The closing march had the Winning House Esaw in the lead, followed by Runner up Anthony House. This was followed by the Prize distribution ceremony. The Championship Trophies were given to the following athletes: Mandeep Singh of Anthony House for Sub-Junior Boys; Siddhi Rawat of Esaw House for Sub-Junior Girls; Priyansh Sharma of Esaw House for Junior Boys; Alishba of Anthony House for Junior Girls; Ashvani Thapa of Esaw House for Senior Boys, and Diya Pant of Esaw House for the Senior Girls. Jonas (Boys) and Durnford (Girls) House were declared as the Best Marching Squads. Esaw House received the Best Athletics House Trophy for 2019. Chief Guest Bro Jerome Ellens congratulated the Principal, staff and students for an impressive Sports Day. Principal David J Hilton praised the students and teachers for putting up a splendid show to make the event a grand success.