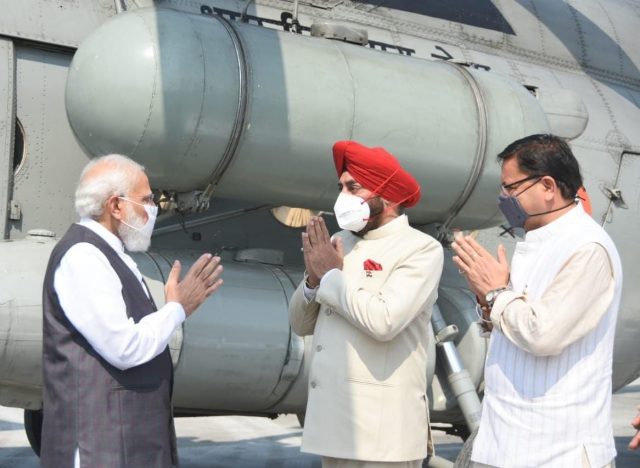 Dehradun, 7 Oct: Prime Minister Narendra Modi inaugurated 35 pressure swing adsorption (PSA) oxygen plants established under the PM CARES fund across 35 states and union territories in an event held at AIIMS Rishikesh today. Modi inaugurated the PSA Oxygen Plant set up from the PM Cares Fund from here by pressing a remote button. With this, all districts of the country now have commissioned PSA oxygen plants. After the inauguration of the life-saving plants, PM Modi said that India was rapidly strengthening its medical infrastructure so that none of the citizens of the country might ever have to face an oxygen crisis. He asserted that the country would successfully battle the Covid pandemic. He asserted that the Centre had made sincere efforts to ensure that no life was lost due to lack of oxygen in future. He revealed that, on normal days, India used to produce 900 metric tons of liquid medical oxygen a day. As the demand increased, India increased the production of medical oxygen by more than 10 times. This was an unimaginable goal for any country in the world, but India l achieved it. He expressed happiness that it was from the land where life-giving forces like Yoga and Ayurveda gained strength, that the oxygen plants were now being dedicated to the entire nation. 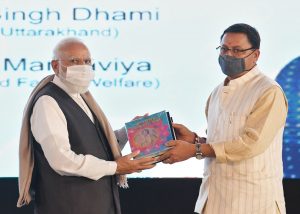 During his visit to Rishikesh, Modi also spoke about his relationship with Uttarakhand and also praised the young Chief Minister Pushkar Singh Dhami. Modi said that he had a relationship of ‘Marma, Karma, Sattva and Tattva’ (philosophy, action, essence and elements) with Uttarakhand. Addressing the function, Modi said that he had a deep connection with Devbhoomi Uttarakhand. This Devbhoomi had played an important role in changing the course of his life. He said that after Uttarakhand was formed in the year 2000, only a few months after, with the blessings of Devbhoomi and Baba Kedar, he got the opportunity to serve as the Chief Minister of Gujarat. He recalled that, today, his journey of public service had entered its 21st year. He was very fortunate to be in Devbhoomi on this occasion. The Prime Minister expressed his gratitude to the people of the country and Uttarakhand as he entered the 21st year of this unbroken journey as head of government.
The PM emphasised that dealing with the worldwide Corona pandemic was a big challenge for India. 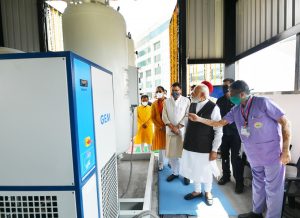 Apart from the population, the geographical locations here stood as a major challenge. But the government, working with determination, overcame this challenge. India had indeed shown a way to the whole world by running the biggest vaccination campaign through the COVID-19 portal. Till now, 93 crore vaccines had been administered and soon India would cross the 100 crore mark. The Prime Minister said that this was a matter of pride for every Indian. India had shown the way to the whole world by building a very effective Covid Vaccine Platform through which vaccination was being carried out on such a large scale.
The Prime Minister added that the facilities India prepared in such a short time to fight the Corona pandemic showed the capability of the country. A network of about 3000 testing labs was created, up from just 1 testing lab before the pandemic. India had transformed from being an importer to an exporter of masks and kits. Facilities of new ventilators were made available even in remote areas of the country. Rapid and large-scale manufacturing of Made in India Corona Vaccine had been done. India had implemented the world’s largest and fastest vaccination campaign. He asserted that what India had achieved in this respect was a symbol of its determination, service and solidarity.
Modi added that under the leadership of the young and energetic Chief Minister Pushkar Singh Dhami, a lot of COVID vaccinations were being done in Uttarakhand. With the effective management of the state government, Uttarakhand would soon complete 100 percent first dose vaccination very soon.
On this occasion, Union Minister for Family Welfare and Health Mansukh Mandaviya also addressed the gathering. He said that while the global pandemic Corona had come as a challenge for the whole world, India fought it resolutely. When the world started to make vaccines for an effective war with Corona, India relied on its scientists. By encouraging them, indigenous vaccines were manufactured in the country itself. Not only this, keeping the spirit of Vasudhaiv Kutumbakam, India also gave vaccines to 120 countries of the world.
Chief Minister Pushkar Singh Dhami appreciated the resolve of Prime Minister Narendra Modi. He said that the Prime Minister was setting new records every day during his journey of 21 years of active public life. He stressed that the Prime Minister had the highest attachment for Uttarakhand. Uttarakhand was progressing in every field under his leadership and guidance. Dhami said that the world’s most popular leader, the most successful Prime Minister of the country was being given a warm welcome and felicitation on behalf of 1.25 crore people of Devbhoomi Uttarakhand on his arrival here.
The Chief Minister added that the Prime Minister had devoted every moment of his life in the service of Mother India and was a source of inspiration for him and many others. Today, the Prime Minister had dedicated life saving oxygen plants to the nation. Dhami added that from the day when Corona was first reported in the country one and a half years ago, the Prime Minister had guided the country like a true leader and able administrator in difficult times. The whole world was witness to the fact that the country, about which experts were expressing various apprehensions, not only faced the pandemic firmly but also played a leading role in making the vaccine. The Prime Minister’s respect for the soldiers was also well known. It was first seen that, as a Chief Minister and now as a Prime Minister, he celebrated Diwali and Holi with soldiers every time.
Dhami emphasised that, today, slogans like self-reliant India, Swachh Bharat, Skill India, Fit India, Make in India were not merely just slogans but had taken the form of a sincere movement settled in the mind of every citizen, every youth of the country. In the Corona era, the Self-Reliant India Scheme and the Pradhan Mantri Garib Kalyan Anna Yojana had ensured employment and two-time meals to crores of people. While on the one hand, the Ayushman Bharat scheme had assured every person of the country treatment at the time of illness, on the other hand the Ujjwala Scheme had wiped the tears from the eyes of crores of poor mothers and sisters. India had seen some remarkable changes, be it construction of Ram Temple or abrogation of Article 370 and full integration of Jammu & Kashmir with the rest of India.
The Chief Minister said that Uttarakhand was not only the land of Chardham, it was also the land of the brave, which the Prime Minister had also named as Sainik Dham. The Prime Minister’s special affection for this land of Uttarakhand was not hidden from anyone. Modi was the Chief Minister of Gujarat at the time of Kedarnath tragedy; even then he stood completely with the people of Uttarakhand. Even in a state that had tough geographical conditions like Uttarakhand in the Corona pandemic, the Prime Minister did not let the state suffer from any shortage of resources. He remained personally concerned about Uttarakhand.
Union Minister of State Ajay Bhatt, former Chief Ministers Trivendra Singh Rawat, Tirath Singh Rawat, Vijay Bahuguna, BJP State President Madan Kaushik, Cabinet Ministers Satpal Maharaj, Yashpal Arya, Harak Singh Rawat, Bishan Singh Chufal, Subodh Uniyal, Rekha Arya, Yatishwaranand, Rajya Sabha members Anil Baluni and Naresh Bansal, Dehradun Mayor Sunil Uniyal ‘Gama’, Rishikesh Mayor Anita Mamgain, AIIMS Director Professor Arvind Rajvanshi, Dean Academic Professor Manoj Kumar Gupta, Prof SK Mittal, Prof Latika Mohan, Nodal Officer Dr Madhur Uniyal were among those present.

Modi puts his stamp of approval on Dhami’s leadership
By Arun Pratap Singh
Dehradun/ Rishikesh, 7 Oct: During his Rishikesh visit, Prime Minister Narendra Modi today praised Chief Minister Pushkar Singh Dhami’s leadership in no uncertain manner. He very vocally put his stamp of approval on Dhami’s leadership. This praise assumes special importance at a time when the state assembly elections are due in about 4 months!
Modi lavishing praise on Dhami makes it clear that Dhami would be very clearly the Chief Minister’s face in the upcoming assembly polls in Uttarakhand. Modi was speaking at the occasion of inauguration of 35 PSA Oxygen Plants from the premises of AIIMS, Rishikesh.
Modi said that the young chief minister of Uttarakhand, Dhami, was determined to make Devbhoomi Uttarakhand the number one state of the country in many respects over the next few years. Modi not only described Chief Minister Pushkar Singh Dhami as a young, energetic and enthusiastic Chief Minister, but also addressed him as a “friend”. The Prime Minister also reminded that the Centre was sincere towards the welfare of the soldiers and ex-soldiers and said that CM Dhami was himself a son of a soldier.
The Prime Minister said that under the leadership of the young and energetic Chief Minister, COVID vaccinations were being carried out at a rapid pace in Uttarakhand. With the effective management of the state government, Uttarakhand was going to complete 100 percent vaccination of the first dose very soon.
Modi promised that the 22-year-old Uttarakhand would be included in the top states of the country with the help of ‘double engine’ governance over the next few years. The Prime Minister added that Uttarakhand would complete 25 years of formation, soon, and this was the right time to ensure that the with the active support and cooperation of the Union Government, the young and dynamic Chief Minister like Dhami along with his energetic team of colleagues takes the state ahead towards realisation of the dreams of the youth.