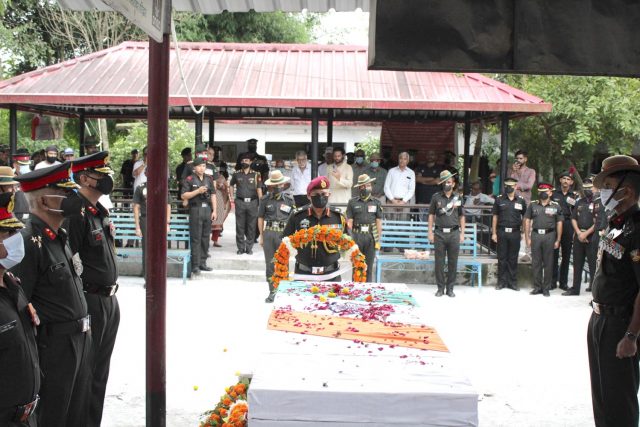 DEHRADUN, 3 Aug: LtGeneral Diwan Siri Ram Sahni, PVSM, SM, ADC, (Retd), former General Officer Commanding in Chief, Northern Command, passed away in the Military Hospital Dehradun in the early hours of 01 August 2022 after battling various ailments. In a poignant ceremony, the Indian Army bid farewell to one of its most distinguished Generals at Tapkeshwar Ghat today. Lt-General Yogendra Dimri, AVSM, VSM, GOC in C Central Command, and other serving officers along with a large number of senior veterans, were present to pay homage to the departed soul. Lt-General DSR Sahni was born on 14 August 1935 at Dhamtaur, Pakistan. Commissioned into the Corps of Engineers on 02 Jun 1955, he commanded the prestigious 1 Armoured Engineer Regiment. The General officer held various important appointments in his illustrious career, including Command of 71 Mountain Brigade, Commander Nagaland Range (South), General Officer Commanding 7 Infantry Division , Chief of Staff Headquarters 2 Corps, General Officer Commanding15 Corps, Quarter Master General in the Army HQ and Army Commander Northern Command. He was the Colonel Commandant of Madras Sappers. Lt-General DSR Sahni was a dynamic leader and a visionary who selflessly dedicated his life to the Indian Army. His regiment and the entire Indian Army will always remember him for his inspirational leadership and his passion for the profession of arms. He is survived by his wife, a daughter and a son who is a naval veteran and a grandson who is a commissioned officer in the Indian Navy.

Garhwal Post has established itself as a credible, balanced and forward looking newspaper in India. Based in Uttarakhand, the daily is read by the aware, socially and culturally responsible, high-income elite of society.
Contact us: info@garhwalpost.in
fat women dating site