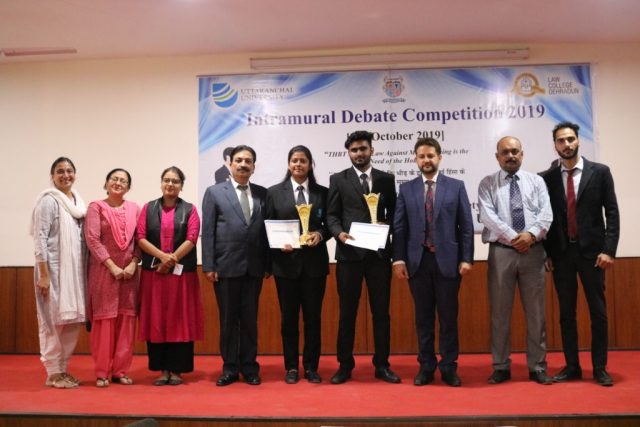 Dehradun, 18 Oct: ‘Aarambh’, the Debating Society of Law College Dehradun, Uttaranchal University, organised a debate on mob lynching, here, today. Director (IT Services) of Uttaranchal University Dr Abhishek Joshi was the Chief Guest at the event. Smriti Uniyal, Dr Lakshmi Priya Vinjamuri and Kumar Ashutosh were the judges of the competition.
The competition was inaugurated with lighting of the ceremonial lamp. The topic of the Debate was “This House Believes That a Strict Law Against Mob Lynching is the Need of the Hour”. Oratorical and argumentative skills of the participants were on full display during the discussion. Those speaking in favour strongly advocated a stringent law to prevent mob lynching, while the opponents laid emphasis on increasing social awareness to tackle the problem.
The adjudicators declared Parth Narayan Singh and Ishu Bhardwaj as the best Hindi and English speakers, respectively.
Chief Guest Dr Abhishek Joshi heaped praise on the organisers of the competition and remarked that such debating competitions provided a solid platform to the students to demonstrate their personality traits.
Principal Dr Rajesh Bahuguna wholeheartedly commended the performances of the participants. “Strict enforcement of existing laws and increased social awareness might prove instrumental in curbing mob violence,” he observed. He also praised the newcomers for their enthusiastic participation in the competition.
Ananya, Convener of the Debating Society, proposed the vote of thanks.
Among those present were Director of the University Dr Abhishek Joshi, Principal & Dean Prof (Dr) Rajesh Bahuguna, Dr Poonam Rawat, Amit Kumar, Dr Lakshmi Priya, Kumar Ashutosh, Kanchan Anand and hundreds of students.