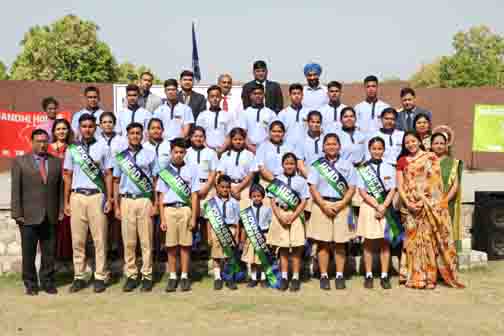 Dehradun, 30 Apr: The Investiture Ceremony for the Academic Year 2019-20 was held today at the Colosseum of the Doon International School Riverside Campus. The event was presided over by the Director, HS Mann, Principal VK Sharma, and Head of Administration, Wing Commander Sandeep Sharma (Retd). The ceremony began with the auspicious Lamp Lighting Ceremony, followed by the Gayatri Mantra. The names of the new Prefect Masters and the members of the Prefectorial Board were announced and, thereafter, the Oath Taking Ceremony was held.
The Investiture Ceremony signifies the reliance and confidence that the school consigns in the newly invested office bearers. Donning the mantle of accountability, the students pledged to perform their duties to the best of their abilities. The students’ council took the pledge to hold the school motto, ‘Deeds Not Words’, in high esteem.
Director HS Mann pinned the badges on to the Head Boys (Junior and Senior) and the Head Girls (Junior and Senior). The Principal pinned the badges for the Sports Captains. The badges of the Captains and the Prefects of all the four houses were pinned by the respective House Masters. In their speeches, the Head Boy and Head Girl thanked the school for entrusting this responsibility and pledged to work earnestly to uphold the honour and glory of the institute. The main appointments were: Junior School Head Boy – Harshit Tyagi;
Head Girl – Nyshita Goel; Senior School Head Boy – Prashant Basist; Head Girl – Mansi Papnai; Sports Captains – Vedansh Singh, Sharmila Kunwar.
Addressing the students and the staff, Director HS Mann congratulated the new Prefectorial Board and encouraged them to be honest and impartial in discharging their duties. He also exhorted them to lead by example and become role models for the future generations. He concluded on a very inspiring note saying that one doesn’t become a leader by merely wearing a badge but carrying that badge with respect and honour is something that gives credibility to it.