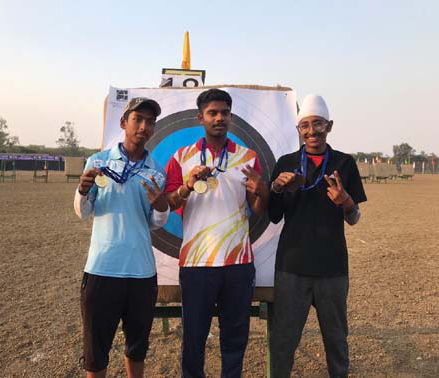 Dehradun, 19 Nov: Jai Singh, a student of Doon International School, Riverside Campus class is an accomplished archer of international acclaim. With many victories to his credit, he has yet again won two Bronze Medals at the CBSE National Championship held from 15 to 18 November at The Great India School in Raipur, Chhattisgarh.

Jai participated in the under 17 category in Mixed Team and Elimination and proved his mettle once again. Earlier, in October, he had won a Silver Medal in the North Zone CBSE Schools’ Archery Competition held at Salwan Public School, Ghaziabad, and had also won 2 Gold Medals and 1 Bronze Medal in the first Uttarakhand Archery State Championship held in Dehradun on 5 and 6 October.

Garhwal Post has established itself as a credible, balanced and forward looking newspaper in India. Based in Uttarakhand, the daily is read by the aware, socially and culturally responsible, high-income elite of society.
Contact us: info@garhwalpost.in
i like an older guy absolutely free hookup sites