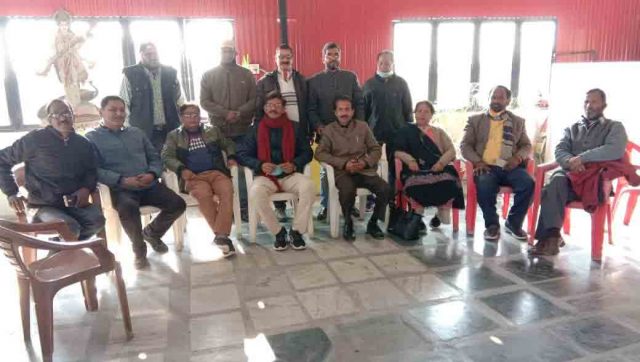 By Our Staff Reporter
Dehradun, 30 Dec: Journalists Union of Uttarakhand has again decided to extend coverage of its members under group life insurance of Rs 2 lakhs, each. This decision was taken at a meeting of the Union chaired by State President Arun Pratap Singh held, here, today. The meeting was convened by State General Secretary Umashankar Pravin Mehta and several issues pertaining to media persons in the state were discussed in detail.
In the greater interest of all, it was decided to hold a special camp for the members of the Union for registration under Atal Ayushman Yojana Golden Health Card scheme. All the members and their family members who have not got their Atal Ayushman Yojana Golden Health Card Scheme will be able to get themselves enrolled at the camp.
Besides the afore-mentioned decisions, several key issues concerning the welfare of the journalists were also discussed. Speakers severely criticised the government for its arbitrary advertisement policy and it was pointed out that only a handful of newspapers had been issued major advertisements issued by the government during the entire Corona period. It was stressed that the government was adopting a very non-transparent policy on issuing advertisements to various publications.
Senior journalist and member of the National Council of Indian Journalists Union, Girish Pant noted that, although the Information Department had been given a budget of Rs 10 crores for advertisements related to the Corona pandemic, the majority of medium and smaller scale newspapers were not issued any major advertisements related to Corona.
State President Arun Pratap Singh also expressed anguish at the fact that, in the past twenty years, the government could not even set up the Accreditation Committee as mandated under the rules. He further noted that, in the absence of such a committee, which ought to comprise mostly of journalists, the officers of the Information Department were arbitrarily granting accreditation to journalists. The decision to grant or to keep the applications for accreditation pending for long depended on the whims and fancies of these officials. He reminded that the Union had officially registered a complaint in this regard with the Press Council of India, which had expressed its anger over the government’s inability to set up a press accreditation committee as per the rules.
Speakers further expressed anger at the fact that no new publication had been empanelled for government advertisements during the past 5 years, which showed the state information department in a poor light. A large number of publications having completed 5 years of regular publications were also yet to get empaneled by the state information department. At the initiative of the union, the Press Council had expressed its anger against the government but, still, no progress had been made. It was decided that the Union would again pursue the issues with the state information department as well as with the Press Council of India. The members expressed anguish at the fact that despite the Advertisement Empanelment Committee having been set up by the government, no new publication had been listed by the committee during the past 5 years.
In the meeting, the Dehradun district president of the union, Chetan Khadka, while drawing the attention of the members towards the discrepancies of the information department, said that despite having been issued advertisements by the information department, officials still withheld issue of the ROs for the same on several occasions. It was decided at the meeting that a letter would be sent to the Chief Minister for issue of advertisements of at least Rs 2 lakhs per annum to all small and medium newspapers.
It was decided that the biennial election of the Journalists’ Union of Uttarakhand be deferred due to the Corona pandemic. The members were of the opinion that the tenure of the present executive of the union be extended till September 2021. Following this, a resolution to this effect was passed unanimously at the meeting.
Today’s meeting was hosted at the residence of Adhir Mukherjee, member of the state executive union. While State General Secretary Umashankar Pravin Mehta convened the meeting, those present included State Treasurer Lalita Baluni, District General Secretary Avnish Gupta, Executive Member Mohammad Shah Nazar, Moolchand Topwal, Vijay Kumar Sharma, Sanjeev Sharma, SP Uniyal, Sanjeev Pant and Dwijendra Bahuguna.