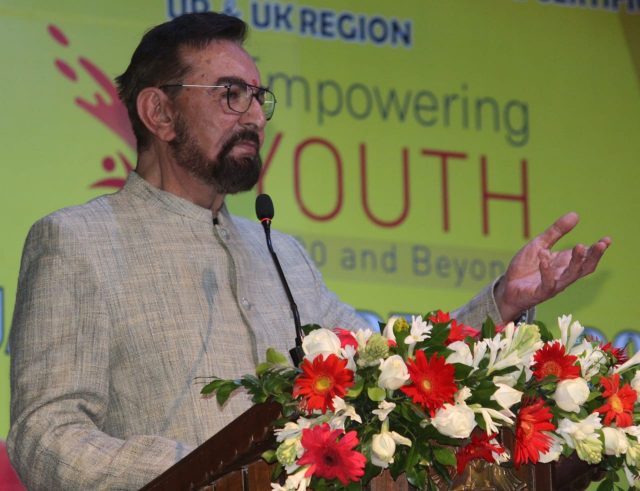 MUSSOORIE, 27 Sep: Internationally acclaimed actor from India, Kabir Bedi today called upon teachers to go beyond the curriculum and subject knowledge towards ensuring wholesome development of their students. He was speaking as the Chief Guest at a function organised at St George’s College, Barlowganj, here, today. Bedi said that education did not end with school, as learning was a lifelong process, but the values and qualities inculcated among the children by the teachers served them throughout their lives. He was delivering the keynote address at the ASISC Annual Conference 2019 (UP & Uttarakhand) of Principals from schools affiliated to the Indian School Certificate Board on the theme, ‘Empowering Youth 2020 and Beyond’. Bedi recalled that he had been lucky to experience an eclectic education as he began at a school in Kashmir, then joined a small school in Delhi, before joining the Delhi Public School, which had then started as a single school to cater to refugee families and ran in tents initially. He went on to join Shanti Niketan and it was here that he was given the opportunity to act by a teacher. Later, he landed at the famous Sherwood School in Nainital from where he passed out to join St Stephen’s College in Delhi. He noted that he was immensely thankful to his parents and teachers and recalled that both his parents were graduates from Oxford University, where they met and married and later settled in India to become freedom fighters. They inculcated human values in him, taught him to value truth and dignity. He called upon teachers to Kabir Bedi calls for overhaul of education system impart more than just course knowledge to the students. Asserting that he had great regard for teachers, Bedi recalled that his sister was a great teacher who dedicated her entire life to teaching children with special needs. He was so proud of her that, whenever he travelled with her in US, where she lived, they always came across her former students who greeted her with gratitude, which made him very proud. Bedi noted that the best of teachers did not just teach but went much beyond through their words, deeds and by setting an example. Apart from the course curriculum, it was necessary to teach kindness, compassion, courtesy, gratitude and humility, too, to the children. He added that teaching was still not a lost art, but regard for teaching had been lost somewhat! He added that whatever little known about human history was mostly related to just about the past 6 to 7 thousand years. But most certainly, the greatest changes in the history of mankind happened in the past one hundred years. These hundred years had been the most happening and the most exciting times in the entire history of mankind. Just about a hundred years ago, there was barely any electricity, there was barely any modern system of communication, and there were barely any cars. However, it had now become impossible to imagine life without electricity, without computers, without the internet and now knowledge was entirely at the fingertips of everyone through the press of a button. And in these hundred years, many novel technologies came and vanished. Telegrams, faxes and typewriters were now relics of the past. However, it would be worth remembering that it was not the most powerful or the most intelligent races or species which had survived, but the ones who learnt how to adapt to changing times and environment. The teachers ought to inculcate the ability to adapt among the students. Bedi also dwelt on the objectives of education and stressed that, earlier, the purpose of education, particularly in India, was to create manpower for white collar jobs. This was not suitable anymore since the population of young people in the country was far more than the number of white collar jobs available, at present. Hence, there was a need to overhaul education and it was now the responsibility of teachers to disseminate information among the students about the changing environment as well as about the schemes, policies and initiatives being taken by the government. Praising the Union Government for its initiatives and policies and for intending to bring about a change, particularly for wanting to overhaul the education system by bringing in a new education policy, Bedi added that the existing education system had outlived its role. Admitting that different persons had different and even extremely differing opinions about the new policies and initiatives, he said it had to be remembered that those who formulated the new education policy were also human beings not gods and that everything need not be looked upon with cynicism and negativity. Positivity was the key to adapting and making changes, he added. The ASISC Annual conference for UP and Uttarakhand is a two day event hosted this time by St George’s College as its Princiipal Bro Tomy Varghese is the current President of ASISC, UP and Uttarakhand region. Father Sunny Jacob, Secretary, Jesuit Educational Association of South Asia (JEASA), gave a presentation on the proposed Education Policy-2019 of the Union Government and critically analysed it, underlining the need for reconsideration of many aspects. The programme began with some cultural events and a welcome address by Sudhir Joshi, Secretary Treasurer of the Association, while the Vote of Thanks was proposed by Vanita Malhotra, Joint Secretary of the Association. Prayers were conducted by Bishop of Meerut Rev Francis Kalist. Mementos to the speakers were presented and the vote of thanks was proposed. Post lunch, the delegates witnessed stage performances by a group of students from St Joseph’s Academy, Dehradun. They were also taken on a campus tour and visited Mussoorie.