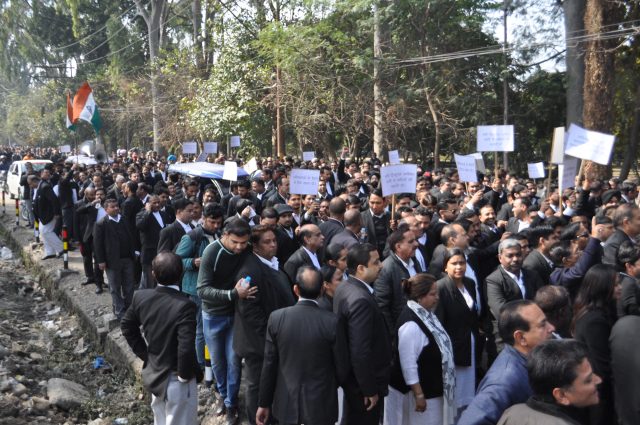 By OUR STAFF REPORTER
DEHRADUN, 12 Feb: Lawyers of the entire state remained on strike today at the behest of the Bar Council of India and Bar Council of Uttarakhand. They also attempted to march to the Raj Bhawan, but were stopped by the police at the Kanak Chowk barricading. On being stopped, the lawyers held a protest dharna at the spot.
The lawyers gathered at the Collectorate in the morning and attempted to march to the Raj Bhawan. They had heated exchanges with the police on being stopped. ADM Arvind Pandey accepted their memorandum of demands addressed to the President and the Prime Minister, after which the lawyers returned. The demands include appointment of lawyers to state government units, commissions and committees instead of retired judges, insurance cover of Rs 20 lakhs for lawyers and their families, family pensions for junior lawyers, interest free home, vehicle and library loans, etc. They also want Rs 50 lakh assistance for families of lawyers who die before the age of 65.
However, the strike call went unheeded in the Nainital High Court. Cases were heard as every other day. A token protest was held, though, under the banner of the High Court Bar Association.

Garhwal Post has established itself as a credible, balanced and forward looking newspaper in India. Based in Uttarakhand, the daily is read by the aware, socially and culturally responsible, high-income elite of society.
Contact us: info@garhwalpost.in
https://garhwalpost.in/dating-for-professionals/