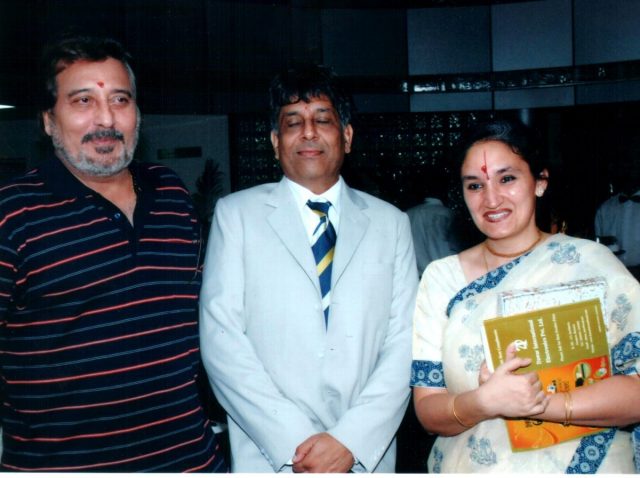 By Kulbhushan Kain
I watched “Mere Apne” two nights ago. It was a Vinod Khanna starrer. He passed away 4 years ago. His memories came flooding back. The first was that of Jabbar Singh in “Mera Gaon Mera Desh”, in which he impeccably depicted a dacoit. Then there was Shyam – the leader of a gang in the classic “Mere Apne”. The anger, the intensity, the expressions as he sings “Koi hota apnaa yaron” was unmatched. He looked swashbuckling in Qurbani. He looked suave as Amar in Amar Akbar Anthony. He looked like a killer in Achanak … His amazing looks – whether he was in an angry mood, a happy mood, in the role of a villain or a hero, he always stood out. There were so many Vinod Khannas … so many of them. It is difficult to choose who was the best.

I had the good fortune to meet him quite a few times. The first was in Chandigarh in the late 70s. I was a young lecturer teaching at the DAV College for Men. A very good friend of mine, Dr Kapoor, told me that he was going to meet Vinod Khanna who was in the city. Would I be interested in meeting him as well? I jumped with joy at the offer!! Who would not want to meet him? He was at the top of his trade at that time and was shooting for a film. We waited for him at the “Mount View Hotel” where he was staying. He came in – late by about an hour. He was dressed as a fighter pilot and carried a helmet in his hand. He looked very special. It was not just the looks – but the effusive charm that he radiated that had one spellbound! It was as if God had worked personally on sculpting him!

Years rolled by. He kept reaching and climbing the peaks of popularity and stardom. I seldom missed any movie of his. When he stepped into his sixties, I had the fortune to meet him again! This time I had the privilege to sit next to him at a function in DPS Gurgaon, where he had come as the Chief Guest.

This time around, I had the opportunity to interact with him. He told me that he was also a Dipsite (he had a stint at DPS Mathura Road). Then he very wickedly added “But not fortunate enough to be a Principal!”

There was a cricket match on and he enquired about the score. Being a cricket addict myself, I was surprised that during the middle of a programme, he was enquiring about a cricket score!

“I have played cricket with Indian Test cricketers Budhi Kunderan and Eknath Solkar,” he remarked with that deadly smile.

What a man. The way he posed for photographs with everyone (one sitting on the steps of the auditorium stage with kids falling all over him is etched in memory). He then complimented the kids and told them that if he was as talented as them, he would have also become a good actor.

That brought the house down! Quintessential Vinod Khanna!

The last time I met him was at the house of Ravi Jaipuria, when Raviji’s Dad had passed away. He looked overweight. He looked bloated. He did not look the man who I had met on the previous occasions. He wore a crumpled white linen shirt and his trademark shades. He looked sad.

Yet he acknowledged me and said, “Kaise hoh Principal Saheb?”

That was the last I saw of him. Shortly afterwards, he passed away.

He was created to prove that even ordinary people can touch and interact with a demi God. Thank you Vinod Khanna for the good times. Thank you God for creating him.

“Life dies but forever will there be music. Always.”

(Kulbhushan Kain is an award winning educationist
with more than 4 decades of working in schools in
India and abroad. He is a prolific writer who loves
cricket, travelling and cooking. He can be reached
at kulbhushan.kain@gmail.com)