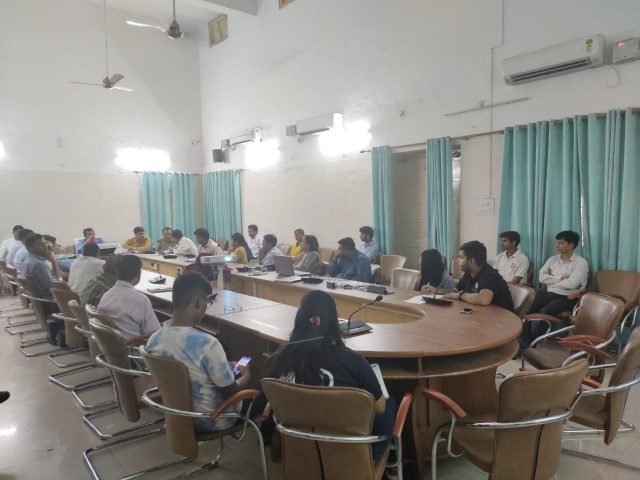 Dehradun, 4 Jul: Student activist group MAD called on the new DM, C Ravishankar, on his invitation to discuss rejuvenation of River Rispana. MAD has asked the administration to own up to the failure of the last mega show in July after which hardly any plants survived, as revealed in MAD’s survey. Members who met the DM from MAD included Satvik Nijhon, Arshia, Devesh, Ahana, Pradeep, Himesh, Darish, Nandini and Priyanshi.
The delegation expressed the hope that the DM’s tenure would witness ‘proactive, genuine and verifiable efforts’ along with public participation towards Rispana rejuvenation.
He was told that the group started on the journey of environmental conservation and propagating civic awareness in June 2011 and in the course of the next eight years, emerged as one of Dehradun’s most active NGOs that have caused significant policy impact through its operations. It has convened over five hundred activities such as clean-up drives and awareness programmes, the transformation of dirty, posters and urine clad walls of Dehradun city, distributed soaps among the needy to increase sanitation levels in such areas, etc. The most important campaign has been to impress upon the Government and citizens alike to rejuvenate to drying rivers of Doon valley. The efforts bore some fruit first in 2014 when after its persuasion, the Union Ministry of Water Resources directed National Institute of Hydrology (NIH) Roorkee to undertake a study to assess the possibilities of rejuvenating Dehradun’s drying rivers, namely Rispana and Bindal. This report earmarked Rispana as a perennial stream. Later, after a presentation to the then Environment Minister, Prakash Javdekar, Rispana and Bindal were notified as a part of the Ganga River Basin. Apart from these two achievements, MAD has consistently continued with its on ground activism and has held an activity every Sunday without fail in these seven years. Some of the other achievements include transforming over forty dirty walls in Dehradun City, pushing the Government to reverse a Cycle ban on Mussoorie’s Mall Road, working with other organisations to stall the proposed Smart City project by concretising the tea estates, etc.
MAD has surveyed the entire length and breadth of the Rispana River several times and has prepared a report on its current condition, highlighting problems of encroachment and pollution. The DM was made aware that the need of the hour is to tackle the problem of encroachment in the upper catchment area of the Rispana River and to tackle the problem of encroachment head on in the lower riparian area of the river for any genuine efforts towards its rejuvenation. Therefore, any further effort on Rispana rejuvenation had to be on the lines of genuine public participation. Being the monsoon season, it was time for water conservation efforts in the upper catchment area of Rispana to replenish the river’s depleting sources. MAD offered to assist the Government in any such efforts.