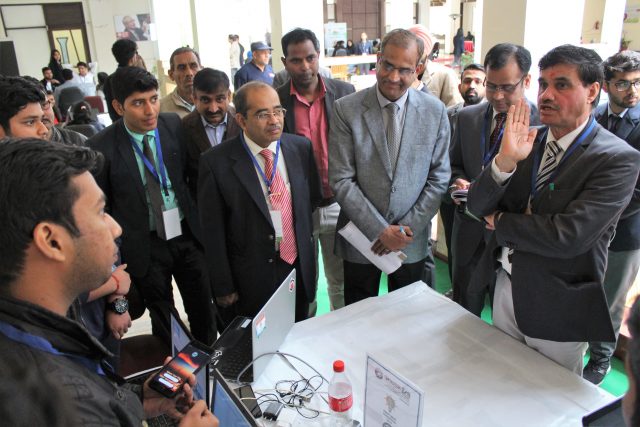 By OUR STAFF REPORTER
DEHRADUN, 3 Mar: Enthused after interacting yesterday with Prime Minister Narendra Modi during his ‘Mann ki Baat’, students found solutions to several complicated problems of the country and abroad on the second and the last day, today, of the Smart India Hackathon at the Graphic Era University, here. As many as 28 teams of students developed new software for solving problems of various government and industrial organisations.
On the occasion, Vice Chairman of AICTE Dr MP Punia said that it would now be mandatory for every engineering graduate to have two thousand hours of work experience before being recognised as an engineer. A bill in this regard had been already finalised.
Yesterday, with the beginning of the grand finale, all teams were seen searching for solutions with their mentors to the problems being faced by industries and government departments. Yesterday, PM Modi interacted with these students through video conferencing and also gave suggestions. Most of the participating teams had resolved the problems even before the completion of the 36-hour-long competition. Experts from various industrial units of the central government remained present as jury members.
Today, Dr Punia reached Graphic Era and personally assessed the work of teams from Maharashtra, Karnataka, Kerala, Tamil Nadu, Delhi, Punjab, Madhya Pradesh, Hyderabad, Rajasthan and Chennai and also gave important suggestions. While interacting with journalists, Dr Punia said that soon provisions would be made to certify engineering degree holders as engineers. Such provisions already existed for architecture students. Students will be authorised to work as engineers only after they have worked for two thousand hours after getting their degrees. A Professional Engineers’ Bill has already been drafted.
Dr Punia added that an AICTE Academy would also be set up soon in Uttarakhand. Residents of Uttarakhand would not have to go to Kanpur for all their work. Along with regular responsibilities of the AICTE, special training would also be provided to teachers in this academy. It will be mandatory for all higher studies’ teachers to undergo six months of training. An eight module course had been prepared for them. Every teacher would have to do this course to be eligible for promotion. Also, in the Seventh Pay Commission gazette, a provision had been made that students’ level of satisfaction would be considered before promoting a teacher.
He added said that the Smart India Hackathon was the best example of the open book concept. He said that 2.30 lakh students have participated in the Hackathon. They competed to develop software and hardware to solve problems in energy, pollution, waste, health, malnutrition and other sectors. A total of 13,000 students were selected from among these and participated in 48 centres spread across the country. Graphic Era was selected as one of the venues on the basis of its infrastructure, quality of education, teachers and achievements. One of the B Tech students of Graphic Era bagging an annual package of Rs 40 lakhs endorsed the quality of education being imparted.
President, Graphic Era Education Group, Prof (Dr) Kamal Ghanshala also visited the Smart India Hackathon venue. Chancellor Dr RC Joshi, Vice Chancellor Dr Rakesh Kumar Sharma and Pro Vice Chancellor Dr HN Nagaraj, Vice Chancellor, Graphic Era Hill University, Dr Sanjay Jasola, representative of MHRD Pooja Kothari, and Chief Administrative Officer of AICTE Kirti Singh were also present on the occasion.