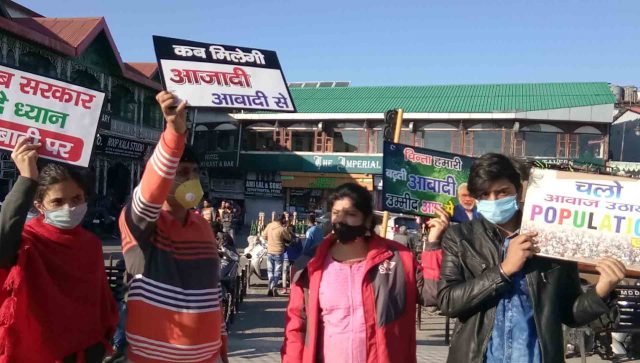 By Our Staff Reporter
Mussoorie, 17 Nov: Meerut resident Rajesh Talwar and his wife Disha Talwar have traveled to 160 cities to make people aware of the hazards of uncontrolled population growth.
On Tuesday, they marched from the Mall Road to the Gandhi Chowk, appealing to the people to become aware of the population growth. The couple had written a letter to the Prime Minister and the Ministry of Health, 24 years ago, to enact a law on population growth. Since then, Rajesh has traveled to 160 cities of the country along with his wife and children to make people aware of the harm caused by population growth and to enact population control laws.
Rajesh Talwar said that, after realising the loss caused by population growth, he started writing letters to the Prime Minister and the Ministry of Health demanding the enactment of a population law from 1994 onwards. Along with this, he started a padyatra to various cities of the country, so that people could be made aware of the problem.
Disha Talwar said she gives information about the population explosion, so that people can create pressure on enacting the law. Both said that family planning could control the growing population of the country. The government needed to be serious in this regard. The Talwars say that they travel acroos the country and give postcards to the people so that they write to the Prime Minister on the subject. So far, they have distributed about 80 thousand such postcards. They have submitted around 6 thousand memorandums to the Prime Minister’s Office.
Their daughter Simran Talwar and son Yash Talwar accompany them in the campaign. Disha Talwar says that, hopefully, the present Prime Minister, Narendra Mode, will consider the matter country seriously. They say that, in a country where 42 children are born every minute, and 61,000 children are born every day, what would be the future? It was a matter of concern. The population was 33 crores at the time of independence and today has crossed 136 crores.
The couple works in the insurance sector.