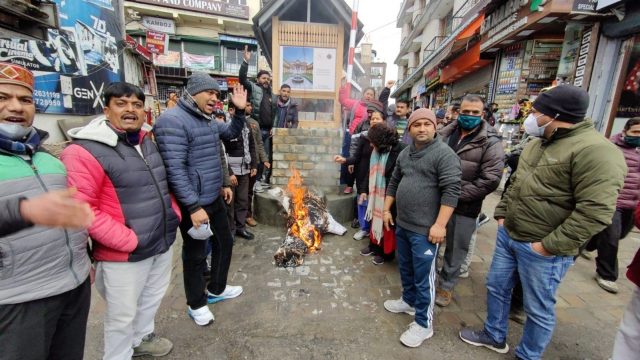 By Our Staff Reporter
Mussoorie, 6 Jan: BJP workers held a protest today over the lapse in the security of Prime Minister Narendra Modi in Punjab. They demanded President’s rule with immediate effect. They raised slogans against the Channi Government and burnt it in effigy.
Mussoorie BJP President Mohan Petwal and General Secretary Kushal Rana said that the incident exposed the intentions of the Punjab Congress. They demanded that the Punjab Government should apologise to the Prime Minister soon and there should be a fair investigation into the matter. It indicated the fear in the Congress of PM Modi’s popularity.
Present at today’s protest were Mussoorie BJP Mandal President Mohan Petwal, Kushal Rana, Amit Bhatt, BJP Yuva Morcha President Amit Panwar, Abhilash, BJP Mahila Morcha President Pushpa Padiar, Sapna Sharma, Arvind Semwal, Ajay Sodial, Kunal, BJP Scheduled Front President Manoj Reganwal, Rakesh Thakur, Dharampal Panwar and many others.