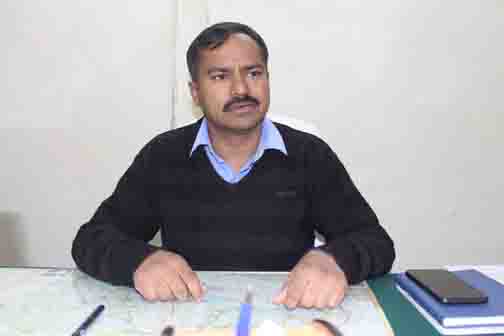 By OUR STAFF REPORTER
Mussoorie, 16 Apr: Mussoorie SDM Gopal Ram Binwal inspected the guest house of the Public Works Department situated at Kempty Road and expressed concern at its decaying condition. He instructed the Executive Engineer, PWD, to take immediate action to improve the condition of the guest house.
He also inspected the under construction auditorium in the Mussoorie Nagar Palika Premises and instructed the contractor to complete work on the ground and upper floor so that it could be used to park vehicles during the tourist season. SDM Ram Gopal said as due to lack of parking in Mussoorie, he had instructed the officials of MDDA to complete the work as more than 300 vehicles could be parked there. He said his main motive was to provide the best facilities to the tourists coming to Mussoorie from all over the world. He pointed out that Mussoorie and nearby areas were dependent on the tourist season and, therefore, it was the duty of all to provide the best facilities.
He added that a meeting had been convened for the coming Yatra and tourism season with the officials concerned on 20 April. The officials were to provide detailed reports on the homework done for the Yatra and tourism season. He had also instructed the officials of MDDA to mark all the illegal construction going on in Mussoorie so that legal action could be taken. He asserted that illegal construction would not be tolerated at any cost and if any official of the MDDA and others were involved, strict action would be taken against them.