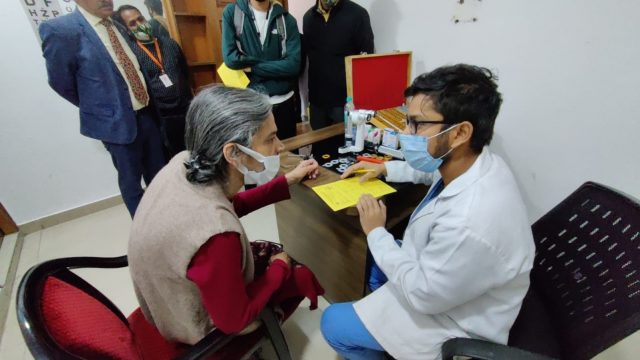 By Our Staff Reporter
Mussoorie, 27 Oct: Under the aegis of All Mussoorie Senior Citizens’ Welfare Association, Dehradun’s Vivekananda Netralaya organised a free eye check-up camp at the Mussoorie Health Care Centre, here, benefiting hundreds of people. On this occasion, the doctors found 13 cataract patients during the eye examination, who will be operated on at the Vivekananda Netralaya. On this occasion, the students of the school also got their eyes checked. Free medicines were also distributed by the team of doctors.
Association Secretary Narendra Sawhney said that due to lack of an eye hospital in Mussoorie, people have to go to Dehradun for treatment, which causes problems. So, the free eye check-up was organised by the association. He said that, in the present scenario, most complaints are of cataract. Those identified today would be treated by the Association. He said that, earlier, there used to be the Gandhi Shatabdi Eye Clinic in Mussoorie, but due to the negligence of government, it had become non-functional. Senior citizens have demanded many times that it be made operational again, but to no avail. The effort, however, would continue. He said that the Association is continuously working in the social interest and its members. He said that free eye check-ups will be held every month at the Centre.
Present on the occasion were Sheshpal Negi, Shubham, Arun Patel, Sunita Khanduri, Diwakar Vishwas, Vijay Kumar, AS Khullar, Narendra Sahni, KK Bery, GS Manchanda, GK Gupta, Ramprasad Kavi and others.