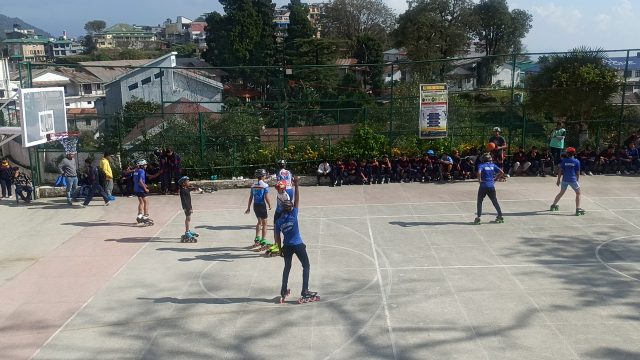 By Sunil Sonker
Mussoorie, 27 Oct: The All India Invitational Roller Basketball and Speed Skating Championship began here, today, under the aegis of Uttarakhand Multisport Association, and Uttarakhand Roller Basketball Association under the aegis of Amateur Federation of Roller Basketball India, at the Mussoorie Public School ground. Players from different states across the country participated. The championship was inaugurated by Amit Jugran, Principal of Mussoorie Public School.
On this occasion, Amit Jugran said that during the Corona period, the students had experienced difficult times. He said that in this championship, more than 84 players from different states of the country are participating and displaying their skills. International Roller Hockey Coach Balwinder Singh Johal said that, after the Corona era, the All India Roller Skating Championship has been organised in Mussoorie. This was being done as preparation for the soon to be held International Indo-Nepal Championship. He said that his main objective is to encourage players from all over the country to hone their skills and get them selected for national and international championships.
Present on this occasion were Chairman Manmeet Singh Dhillon, Vice Chairman John David Nanda, Anil Kumar, Rajesh Victor, Arun Yahuna, Sanjay Victor, Sunny, Rakesh Negi, Sanjay Rana and others.