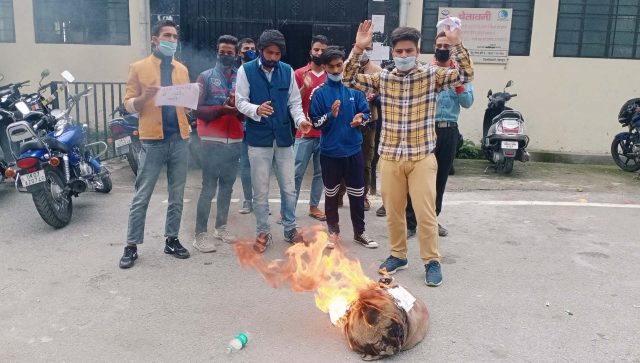 By OUR STAFF REPORTER
Mussoorie, 9 Jul: Mussoorie NSUI activists gathered at the main gate of MPG College here, today, and protested against Human Resource Development Minister Ramesh Pokhriyal ‘Nishank’.
Under the leadership of Mussoorie NSUI President Jagpal Gusain, they raised slogans against Nishank and burnt his effigy with copies of his statement. Activists said that conducting students’ examinations during the Corona pandemic would be playing with their lives and future.
Jagpal Gusain said that the Corona infection was spreading in the country, as also in Uttarakhand. Despite this Minister Nishank was talking about conducting university examinations in September. He said that final year students should be promoted without the exams. By conducting the examinations, the students and their family would have to face lots of problems. Already, all educational institutions in the state are closed till 31 July. In such a situation, the students would not able to complete their syllabus. Uttarakhand is a hilly region. Thousands of students live in the mountains, where there is a problem of mobile connectivity.
The activists have warned that, if the decision to conduct the examination is not withdrawn, their agitation would be continued. Also present at the protest were Nikhil, Rohit Kaintura, Sharukh, Amit, Shivam, Dhanpal, Jaspal, etc.