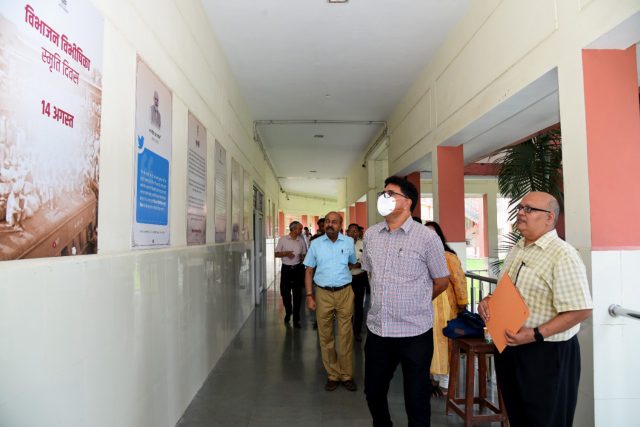 Dehradun, 12 Aug: A four-day exhibition relating to the memories of the Partition was

On display were posters depicting information on the atrocities and gruesomeness of the Partition that thousands suffered. Countless memories of the partition are depicted through pictures at the exhibition.

‘Partition Horrors Remembrance Day’ is a national memorial day in India observed on 14 August that commemorates the victims and sufferings of people during the Partition of India. The day remembers the sufferings of countless Indians during the partition.

Dr Vijay Dhasmana, Vice Chancellor, SRHU, inaugurated the special photo exhibition dedicated to ‘Vibhajan Vibhishika Smriti Diwas.’ Dr Dhasmana reminded that during the partition of India about 5 to 10 lakh people died. This partition also led to the painful incident of migration of millions of people.

In memory of these, the Government of India has announced that, henceforth, 14 August would be celebrated as Partition Vibhishika Remembrance Day.

Through this exhibition the present generations are being made aware of the horrors of partition. The purpose behind observing this day is also that people should understand and know that millions of people had to sacrifice their lives for freedom. Dr Dhasmana stated that the exhibition would be on till 15 August.

Present on the occasion were faculty members and students.

Garhwal Post has established itself as a credible, balanced and forward looking newspaper in India. Based in Uttarakhand, the daily is read by the aware, socially and culturally responsible, high-income elite of society.
Contact us: info@garhwalpost.in
south asian dating meetup rotterdam