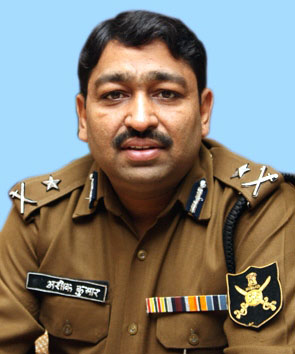 Dehradun, 27 Nov: Uttarakhand Police is organising its 3rd edition of the Marathon on 2 December. The theme will be “Run against Drugs, Run for Life”.

To make this event a mega one, Uttarakhand Police has started a drive against drugs. Throughout the month, workshops on drugs were organised at the Graphic Era University, DIT, St Joseph’s Academy, Social Balooni Public School and Brightlands School by the state level Anti Drugs Task Force (ADTF), as well as the District Police.

During the workshop, the Anti Drugs personnel briefed youngsters on the dangers of alcoholism and drug abuse. A video film called “Death Wish” and a Nukkad Natak were also shown to the children.

ADBP Ashok Kumar stated that told students that, often, the onset of drug abuse began with smoking and ended with death. The only one to profit was the drug mafia. He said that it was necessary to avoid intoxicants and take the initiative to end this serious problem. If such irregularities were underway anywhere, the police could be informed immediately on the mobile number – 9412029536.

He added that, this year, online registration for the marathon had been done by 13,169 people. A total of 5303 (4662 males and 641 females) were participating in the 21 kms run, while 7866 were running the 10 kms stretch (6412 males and 1454 females). The Half Marathon would have 32 foreign athletes from 11 countries (USA-5, Kenya-4, Bangladesh-1, Nigeria-2, Afghanistan-1, Libya-1, Ethiopia-11, Mongolia-1, Oman-1, Thailand-1. Counters have been installed at Petrol Pumps, the Race Course Police Lines and the Pavilion Ground for offline registration. The last date for online / offline registration was 28 November.

Garhwal Post has established itself as a credible, balanced and forward looking newspaper in India. Based in Uttarakhand, the daily is read by the aware, socially and culturally responsible, high-income elite of society.
Contact us: info@garhwalpost.in
dating new ross best online dating sites ireland best dating sites for polyamory