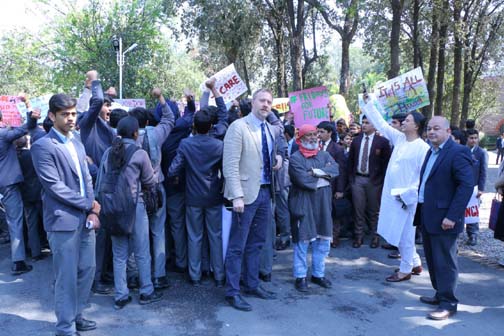 By OUR STAFF REPORTER
DEHRADUN, 15 Mar: Students across the globe protested against Climate Change as part of the #FridaysForFuture movement, today. The movement was first begun by Greta Thunberg, a Swedish schoolgirl who bunks school and sits outside the Swedish parliament every Friday and is a Nobel Prize nominee. She claims that she will do this until Sweden makes progress towards fulfilling the Paris Agreement. Initially, she used to sit alone but, now a horde of students joins her outside the parliament.
In fact, the movement has now expanded and is no longer limited to Sweden. Students from more than 2000 cities in 123 countries have protested against Climate Change, joining the movement Greta began. In India, numerous events were conducted across the country, of which two of the protests were in schools. Spearheading the movement in Uttarakhand was The Doon School.
The school staged a protest inside its campus. Students from The Doon School and neighbouring ones such as Cambrian Hall, Welham Boys, Hopetown Girls and Unison World School, and Gyanodaya, Meerut, marched as a form of protest against governments that they felt weren’t committed enough to solving Climate Change. The students marched because they believed that the required action wasn’t being taken in the status quo. While marching, they chanted slogans like ‘Adults, use your power’ and ‘We are the change’.
Following the protest, five speakers addressed the gathering. The first speaker of the event was the School Captain of The Doon School, Nandil Sharma. He spoke about how, in today’s day and age, people had a choice between whether or not to act, and that they needed to come out on the right side of it. He emphasised the fact that although they were, at the time, supposed to be studying for the upcoming examinations, all their efforts would be futile because there wouldn’t be a future if nations continued on the path currently taken. He spoke about why there was need to be aware of the Climate Change crisis, and why students had to try and make a change due to the political inaction of the leaders.
The second speaker was the President of the Doon School Old Boys’ Society, Rahul Kohli, who spoke about how numerous businessman, politicians and even environmentalists were oblivious of the damage being caused by climate change. He mentioned that his generation had failed to do anything about it and how it was up to the new generation to become the change. He advised students to question the effect everything had on the environment and to speak out against what they felt was wrong, as only then could a change come about.
Kohli was followed by Padma Shri awardee Dr Anil Kumar Joshi, founder of HESCO, who has worked hard in the field of ecology. He spoke about the effect of urbanisation on the environment, and people’s incessant need for comfort, which comes at the cost of the environment. He spoke about how countries were more worried about their economy than their environment, and that people began caring about the environment only when Greta Thunberg took action. However, this feeling of love for the environment needed to come from within, and there was need to implement what they had learned in everyday lives and make a conscious effort to save the environment.
The fourth speaker was the Headmaster of the school, Matthew Raggett, who informed the gathering about the frightening facts of Climate Change, and the school’s efforts to reduce its impact. The last speaker was Bhavya Rajgariha, who proposed the vote of thanks. Also present on the occasion were Kamal Ahuja, Deputy Headmaster, Stuti Kuthiala, Deputy Head of Pastoral Care, Debashish Chakravarty, Deputy Head of Academics, and Piyush Malaviya, Director of Public Affairs at The Doon School.

Garhwal Post has established itself as a credible, balanced and forward looking newspaper in India. Based in Uttarakhand, the daily is read by the aware, socially and culturally responsible, high-income elite of society.
Contact us: info@garhwalpost.in
10 best dating site in usa