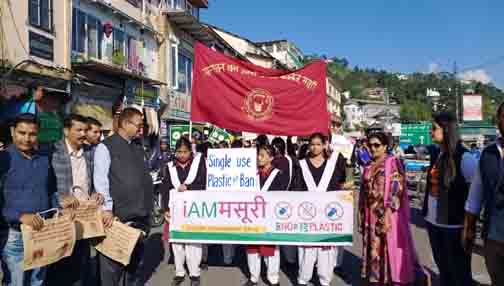 Mussoorie, 18 Oct: Activists of social organisations along with hundreds of students from local Hindi and English schools held an awareness rally against single use plastic from the MDDA parking to Gandhi Chowk under the aegis of ‘I AM Mussoorie Mission’ with the help of Pandit Deen Dayal Upadhyay Action and Research Society.
On this occasion, thousands of cloth and jute bags were distributed to the tourists and the local people by Mussoorie MLA Ganesh Joshi. Ganesh Joshi said that single use plastic had become a serious issue and India was trying to ban its use to tackle the problem of pollution in the country. He said that history was witness that no movement could be successful without the cooperation of the public. To end the single use plastic, it was necessary to have the cooperation of the public, for which efforts were being made to make people aware regarding the use and harm of single use plastic.
Joshi added that Mussoorie would be the first city in the country where single use plastic would be completely banned after 31 October.
Students Eliza Parveen and Jaspal Pundir said that all people had to be aware to eliminate single use plastic. They said that due to the use of plastic, the environment was getting polluted, wild animals were dying and everyone had to be aware.
On this occasion, the Hotel Association of Uttarakhand, Mussoorie Hotel Association, Municipality Mussoorie, Senior Citizens Mussoorie, Matr Shakti and other social organisations participated. Also present were Neha Joshi, Madan Mohan Sharma, Sandeep Sahni, Rakesh Agarwal, Mohan Petwal, Kushal Rana, Rajat Aggarwal, Jagjit Kukreja, Principal SP Joshi, Professor Amitabh Bhatt, ML Upadhyay, Student Union President Prince Panwar, Anil, Tanmeet, Sapna Sarma, Aman, Nikhil Thapa, Naveen Shah, Sumit Bhandari and many others.