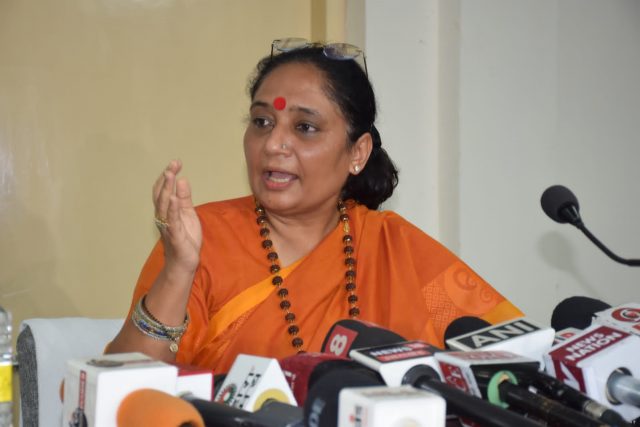 Dehradun, 23 Sep: It was late last evening that Speaker of the Uttarakhand Assembly, Ritu Khanduri Bhushan received the report of the inquiry committee appointed by her to investigate appointments made in the Assembly Secretariat. Today, in a major step, she called a press conference and declared that she was recommending nullification of all irregular appointments made in the Assembly Secretariat and declared that she had also taken a decision to suspend Assembly Secretary Mukesh Singhal in view of the suspicious role he appeared to have played in the irregularities. She felt that his role ought to be investigated and was therefore ordering an inquiry in this regard. Till the completion of such an inquiry, Singhal would remain suspended. 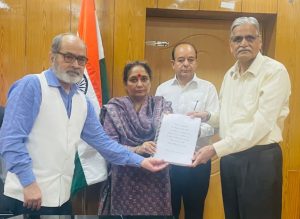 It may be recalled that Bhushan had called a press conference soon after the controversy surfaced regarding irregular appointments made in the Assembly Secretariat under various speakers exactly 22 days ago and had stated that she would order an inquiry into the whole affair. A Committee headed by retired IAS officer DK Kotia, and comprising retired IAS officer Surendra Singh Rawat and Avnendra Singh Nayal as members was given a month’s time to investigate and submit its report. The Committee submitted its report late last evening.

Addressing the press conference, today, Bhushan said she had made it clear earlier to the media that she would not hesitate to take tough decisions regarding any irregularities in appointments made in the Assembly Secretariat and would ensure that the youth of the state are not betrayed.

She said the inquiry committee had done commendable work and submitted its report before the stipulated period. The full report is of 214 pages including the attachments while the reporting portion consists of 29 pages. The committee, after examining the records of the Legislative Assembly Secretariat, found that there were irregularities in the ad-hoc appointments made in the year 2016, in 2020, and in 2021. The rules laid down for various posts in these recruitments had not been followed.

The Committee found that no competitive examination was conducted for making ad-hoc appointments. By not providing equal opportunity to all eligible and interested candidates for these ad-hoc recruitments, Article 14 and Article 16 of the Constitution of India had been violated. The inquiry committee also mentioned in its report that, under an order dated 6 February, 2003, of the Personnel Department, there had been a ban on the appointments made on ad-hoc/contract/fixed pay/daily pay in various departments. In the said order, there was provision that no appointment would be made on daily wage/ad hoc /contract/fixed pay on any post of Groups C and D. There would be a complete ban on such appointments.

She also stated that, in the year 2021, applications were invited by the Legislative Assembly Secretariat for direct recruitment to 32 different posts, for which written examination was also conducted on 20 March this year, the result of which had not been declared yet. For this test, a private agency of Lucknow, M/s RMS Technosolutions Pvt Ltd had been hired. The activities of this agency have been controversial and it is also facing serious allegations of question paper leakage and, due to this, at least 5 competitive examinations conducted under UKSSSC had been cancelled and many arrests had been made. Therefore, she was also cancelling the recruitments process for these 32 posts and ordering an investigation into the role of the agency.

Prima facie, the role of Secretary Assembly Mukesh Singhal also appeared to be suspicious in this regard and his role also needed to be investigated. Till such inquiry was completed, Singhal would be suspended with immediate effect. Action would continue on the various recommendations and suggestions given in the report of the Inquiry Committee.

Bhushan also listed some of the recommendations of the committee and they include right sizing of employees/officers in the Legislative Assembly Secretariat, e-office, e-vidhan, promotion and reforms in service rules.

Garhwal Post has established itself as a credible, balanced and forward looking newspaper in India. Based in Uttarakhand, the daily is read by the aware, socially and culturally responsible, high-income elite of society.
Contact us: info@garhwalpost.in
dating much older man https://garhwalpost.in/dating-agencies-in-manchester/ https://garhwalpost.in/good-looking-men-over-50/