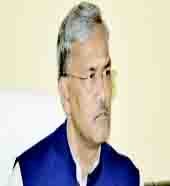 DEHRADUN, 13 Dec: Chief Minister Trivendra Singh Rawat’s recent trips to Delhi led to speculation that the two vacant cabinet berths would be filled up soon. But, the CM and the Party’s state unit seemingly continue to be in a fix over filling these posts. In fact, when the CM went to Delhi and met senior party leaders early this week, party sources had indicated that finally these cabinet berths would be filled up soon after the CM returned.
Well placed sources in the party as well in the government had indicated that not only the vacant cabinet berths would be allocated soon but also many ‘lal batti’ posts would be filled. Sources had also claimed that Munna Singh Chauhan, a three time MLA, Bishan Singh Chufal and Bansidhar Bhagat were leading in the race for cabinet berths, though there are several others who are also several time MLAs like Harbans Kapoor, Balwant Singh Bhauryal and Chandan Ram Das. Claimants to these posts assert that the CM is overburdened with the charge of many important departments like Health, PWD, Power, etc., and is not able to devote enough time to his actual job.
What is pertinent to point out here is that speculation is rife currently in BJP circles that a significant number of party MLAs are anguished with the government and the party High Command, since they are not being “heard’ by their own government and it was getting difficult for them to get their work done. Also, some of the ‘angry’ MLAs are also lobbying for cabinet berths. In addition, some also complain of the “high handed attitude of the CM and his cabinet colleagues”. However, political observers claim that despite this anger and dissatisfaction among the party MLAs, there was no immediate threat to Trivendra Singh Rawat’s chair and since the party is in a brute majority and unless a very large number of party MLAs rebel, there can be no danger to the government.
However, they agree that the CM and his cabinet colleagues need to be more responsive and positive towards the problems being faced by the party MLAs since, after the defeat of the party in three big states where the BJP was in power, the party is no more in position to ignore dissidence at any level in Uttarakhand or any other state particularly in view of the coming general elections in a few months from now. The stakes are high and the BJP does not look invincible anymore, they claim.
Besides the race for cabinet berths, many party leaders are strong claimants to important Lal Batti posts which are yet to be filled up. They are angry that more than a year and half have already passed and the wait for distribution of Lal Battis is turning into an endless test of patience. This, they claim, may affect the party’s performance in the very crucial Lok Sabha polls early next year. They claim that, unlike other parties, BJP despite having a “charismatic” face like Narendra Modi remains dependent on the party cadre to pull the voters to the polling booths. Undue delay in distribution of Lal Battis is making the party cadre anxious and even angry.