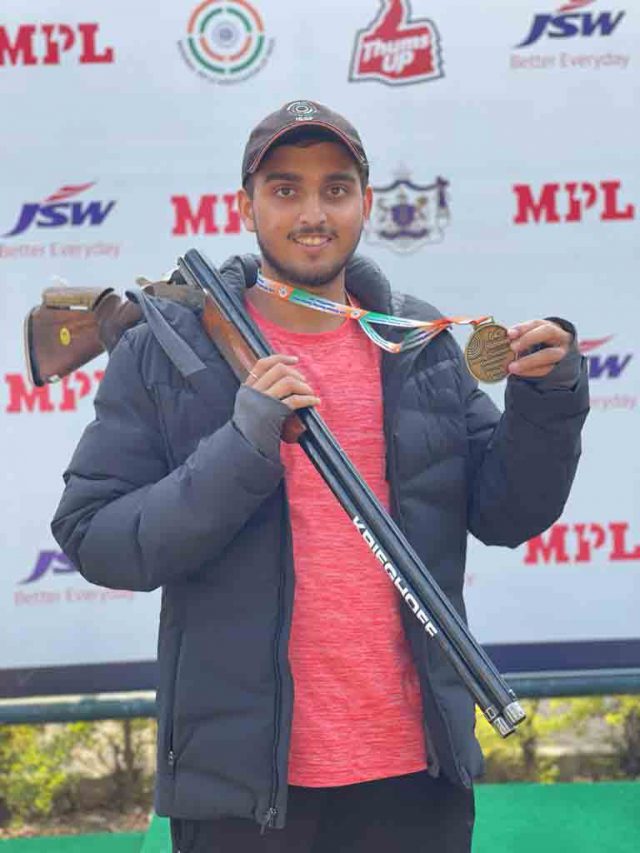 Dehradun, 14 Nov: The 19 year-old international shooter from Uttarakhand, Shapath Bharadwaj, won a Gold medal in Trap Shooting at the 64th National Shooting Championship (Shotgun), which concluded in Patiala on Tuesday.
Shapath clinched the gold medal in Trap (Jr) beating Vivaan Kapoor of Rajasthan in a high voltage final played at the New Motibagh Shooting Range of Patiala.
Shapath and Vivaan completed qualification rounds with the same score of 113 out of 125 and, thereafter, in the finals they again tied at 41 out of 50. The final match was then decided by a shootout, in which Shapath pipped Vivaan to the Gold. Aakaah Kushwaha of Madhya Pradesh won the bronze medal.
Shapath is first shooter from Uttatakhand to have become national champion in the Trap event (Jr).
Shapath has earlier represented India in, both, junior and senior teams at international matches in Double Trap event including World Cups, World Championships, Grand Prix and International Shotgun Cups in Germany, Italy, Moscow, South Korea, Cyprus, Mexico and Finland. He has, so far, won 9 international medals with best world ranking of 18 and Asian ranking of 8 in double trap at the age of just 16 years.
He has held the national record of highest score in junior category in double trap. He also has a New National Games Record of youngest participant at the 2015 National Games in Kerala. He represented Uttarakhand in the National Games at the age of 13 years in double trap and impressed everyone with his shooting. Shapath was also the youngest shooter who made it to the senior double trap team at the age of 14 years and later qualified for the prestigious World Cup Final in 2017.
He switched to the Trap event 3 years ago after double trap was withdrawn from the Olympics. He has trained under the supervision of his Italian coach Andrea Miotto, Indian coach Yogendra Pal Singh and Chief Coach of the Junior Shotgun Team, Vikram Chopra.
His coaches, Andrea Miotto, Yogendra Pal Singh, former world champion in double trap and Khel Ratna Awardee Ronjan Sodhi, Uttarakhand State Rifle Association Secretary Subhash Rana, Divisional Commissioner of Meerut Surendra Singh, Vice President of Manav Rachna University Amit Bhalla, sports director and Dronacharya awardee Sarkar Talwar have congratulated Shapath on his success.