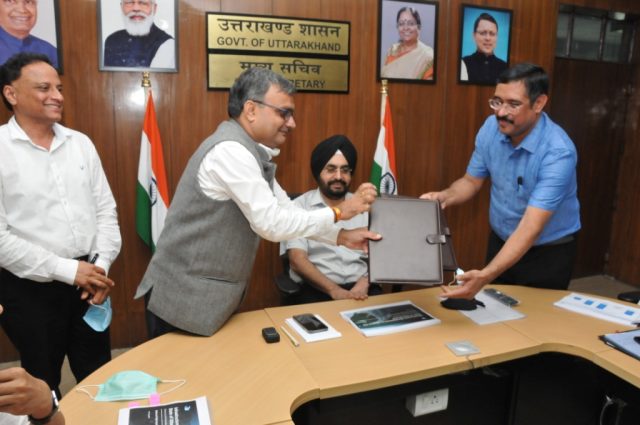 Dehradun, 12 Sep: Uttarakhand has become the first state in the country to sign a contract with the Union Ministry of Road, Transport and Highways for the construction of a ropeway. The Union Ministry of Road, Transport and Highways (MORTH) has been made the nodal department for ropeway construction in Uttarakhand. The DPR will be prepared by National Highway Authority of India (NHAI).
Yugal Kishore Pant, Additional Chief Executive Officer, Uttarakhand Tourism, and Prakash Gaur, Chief Executive Officer of NHLML, Union Ministry of Road, Transport and Highways, signed the MOU
in the presence of Uttarakhand Chief Secretary Dr. SS Sandhu. Present on this occasion were RK Sudhanshu, Principal Secretary, Public Works Department, Manoj Kumar, Chairman, NHLML, Senior Research Officer of UTDB SS Samant and Project Members of NHLML and others.
Ropeways will become a major means of pollution free transport for the commuters and tourists. Under the first phase, seven ropeways of the state – Kedarnath Ropeway, Nainital Ropeway, Hemkund Sahib Ropeway, Panchkoti to New Tehri, Auli to Gaursu, Munsiyari to Khalia Top and Rishikesh will be constructed. The process of DPR preparation and construction of seven ropeways from Neelkanth Mahadev will be done in collaboration with the state government.
Due to the construction of the ropeways, all types of tourists and devotees will be able to get the benefit of darshan by completing these religious journeys easily in a short time.
Earlier, the tourism department has taken action to build and operate the Mussoorie, Purnagiri and Surkanda Devi ropeways in PPE mode. Out of the two, the operation of Surkanda Devi Ropeway will be started by the end of this year.
Tourism Secretary Dilip Jawalkar said that all ropeway construction will enable passengers to enjoy a pollution-free journey. Pilgrims of all ages will be able to reach religious places like Kedarnath and Hemkund Sahib.
Tourism Minister Satpal Maharaj stated, “The construction of ropeways at seven places will definitely boost tourism in the state. Along with this, pilgrims and tourists from all over the country and the world will also be able to enjoy a thrilling journey in Uttarakhand. All the seven ropeways will become the centre of attraction for tourists coming from India and abroad.”

Garhwal Post has established itself as a credible, balanced and forward looking newspaper in India. Based in Uttarakhand, the daily is read by the aware, socially and culturally responsible, high-income elite of society.
Contact us: info@garhwalpost.in
singles in victorville instant hookups