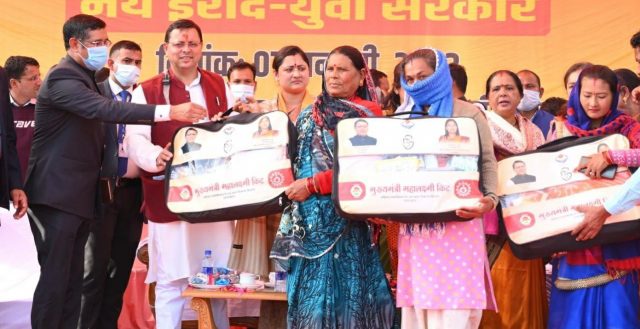 By Our Staff Reporter
Khatima/Dehradun, 7 Jan: Chief Minister Pushkar Singh Dhami today participated in a state level programme, titled “New Intentions, Youthful Government” in Khatima (District Udham Singh Nagar) as the Chief Guest. On this occasion, the Chief Minister inaugurated and laid the foundation stones of various schemes worth about Rs 74.32 crores for the area. During the programme, the Chief Minister distributed Mahalaxmi kits to the beneficiaries and mobile tablets to students of classes 10 and 12.
In his address on this occasion, the Chief Minister said that many development works were being done in the state under the guidance of Prime Minister Narendra Modi. In the last five years, many works had been done in the public interest under the double engine government. Road connectivity, railway connectivity and air connectivity had expanded rapidly. Much work had been done on significantly improving the health facilities in the state and other infrastructure facilities in the past five years. Dhami said that Kedarnath had been rebuilt under the guidance of the Prime Minister. In Badrinath, also, schemes worth Rs 250 crore had been approved. Work was also going on on many road projects under the Bharatmala series. In the last five years, projects and schemes worth more than one lakh crore rupees had been approved for the state by the union government.
Dhami said that a satellite centre of AIIMS was also being set up in Udham Singh Nagar at a cost of about Rs 500 crores. Thousands of people were being treated every day at AIIMS Rishikesh, which was proving to be a big gift for the state in the field of health. The biggest scheme in the field of health in the country was being run under the name of Ayushman Bharat. People had been given universal health cover under the Atal Ayushman Yojana in the state. Consent had been received from the Government of India for the survey of the Tanakpur-Bageshwar railway line. The work on construction of the Rishikesh-Karnprayag rail line would be completed by 2024. Dehradun airport was also being upgraded to an airport of international standard. The Pantnagar airport is also being made a greenfield airport. The state is getting full cooperation from the union government for development of marginal areas.
Dhami said that 6 months ago he was given the responsibility as Chief Minister of the State. In these six months, more than 600 decisions had been taken in public interest. The state government was working on the principle of Antyodaya. The schemes are being run keeping in mind the people standing in the last line of society. Despite the limited resources in the state, in view of the problems faced by the people during the Corona period, work was done to provide relief to the people in every area. Relief was given to people related to health, transport, culture and various other fields. Candidates appearing in competitive examinations have also been given a year’s relaxation in age limit. Dhami said that after he took over as Chief Minister, it was decided in his first cabinet meeting that the recruitment process would be started on all vacant posts in various departments of the state. The recruitment process for many posts is moving ahead at a fast pace. The recruitment process for 1734 posts in the Police Department is also in progress. A new sports policy had been brought in the state. The sports policy provides for various kinds of facilities to the players so that there is no problem in grooming their talent.
The Chief Minister said that Khatima had been his Karmabhoomi. Every effort had been made for the development of this area. Sincere efforts had been made to make this region a hub of education. Kendriya Vidyalaya, canteen facility and other basic facilities had been increased in the area. He said that this area was tribal dominated and, in view of this, a Eklavya Residential School had been opened. For this, he thanked Prime Minister Narendra Modi. The Chief Minister added that an important decision had been taken by the Union Cabinet that the construction of the bridge connecting India and Nepal would be completed within three years. This would prove to be very effective in further strengthening the relations between India and Nepal.
The Chief Minister added that all efforts were being made by the State Government to bring Uttarakhand in the rank of the best states of the country by 2025. For this, suggestions from domain experts and enlightened people were being taken through the Bodhisattva programme. A roadmap for the next 10 years was being prepared from all the departments.
The “Five years of the government, New Intentions-Youthful Government” programme was organised in all the 70 Legislative Assemblies of the state today. All the ministers, MLAs, MPs and other public representatives participated in their respective areas and informed the people about the achievements of the government.