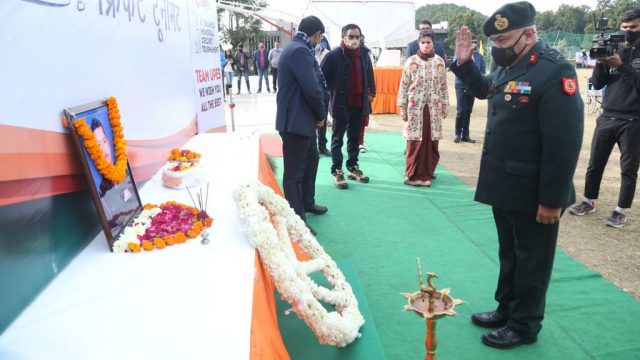 Dehradun, 30 Dec: The 8th edition of the Shaheed Memorial Cup, an annual cricket tournament hosted by UPES to pay tribute to the martyrs of Indian Armed Forces and financially support their families, has begun at the university’s Bidholi campus, here.
Being organised between 28 December and 18 January, the tournament has 18 teams participating from various state departments like ESIC, Secretariat, Agriculture, Income Tax, PWD, DG Medical, Sachiwalya Dangers, Peyjal, UPES, Jal Sansthan, Education, Sports, School Education, Education Ministerial, UP Irrigation, MDDA, Physical Education, UK, and Basic Education.
UPES has been organising the tournament to spread awareness about the selfless contribution of the soldiers and raise funds to aid families of martyrs. This year the tournament is being organised to remember and support the family of martyr Subedar Ajay Singh Rautela, who lost his life fighting for the nation at Poonch, Jammu and Kashmir, in 2021.
Present at the inaugural ceremony were Major General Sanjeev Khatri, GOC, Uttarakhand Sub Area, Dr Veena Dutta, Registrar, UPES, the Deans of various UPES schools, and the Secretariat, Agriculture and UPES cricket team members, who paid homage to the brave martyr Subedar Ajay Singh Rautela. The tournament began with the first match between the Secretariat and Agriculture Department teams.
The quarter finals will be held on 14 and 15 January, the semifinals on 17 January and the final match on 18 January.
The event was conceptualised in 2014, with participation of 10 teams. Ever since, it has grown manifold with the number of participants and audience increasing every year.