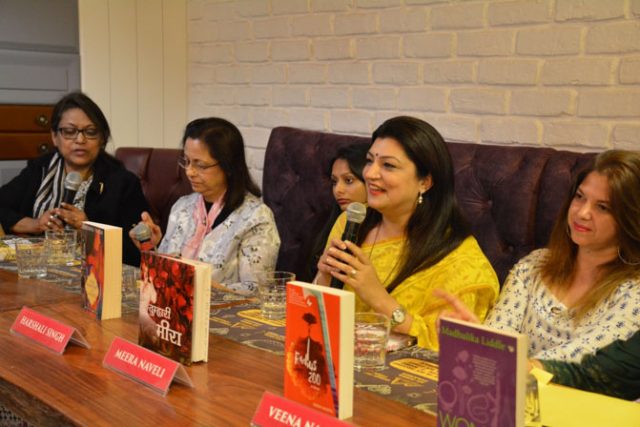 By OUR STAFF REPORTER
DEHRADUN, 11 Mar: To celebrate International Women’s Day, The Booknerds team organized an all Women Writers’ Hangout to honour women excelling in literature, from across India, and to discuss women voices in publishing.
The session was moderated by social entrepreneur Aloka Niyogi, and in the panel were Gauri Mittal, Harshali Singh, Madhulika Liddle, Tanuja Sharma aka Meera, Anita Krishan and Veena Nagpal.
Rohan Raj initiated the session by familiarizing the audience with The Booknerds, and its literary endeavors which comprise of over 125 carefully curated literary sessions, hosting over 60 authors from across India.
The books up for discussion were `Despite Stolen Dreams’ by Anita Krishan,`After Annhilation’ by Gauri Mittal,`Woman to Woman:Stories’ by Madhulika Liddle,`Radius 200’ by Veena Nagpal, `The Anatomy of Choice’ by Harshali Singh and `Tumhari Meera’ by Meera Naveli.
Aloka began with briefing the audience about the history and relevance of International Women’s Day. She talked about how the feminist movement began when the first movement for women voting rights began in America and Europe.
The authors were inquired about how publishing in India is developing and what positive and negative changes it has gone through? All the authors provided their inputs while discussing their own preferences and struggles.
Wrapping up with a quick question-answer session, in which many budding authors talked about the problems they are facing in the industry, the organisers thanked the participants. Every author was eager to give them their suggestions and support.

Garhwal Post has established itself as a credible, balanced and forward looking newspaper in India. Based in Uttarakhand, the daily is read by the aware, socially and culturally responsible, high-income elite of society.
Contact us: info@garhwalpost.in
https://garhwalpost.in/single-man-2022/ foreign singles dating https://garhwalpost.in/best-australian-hook-up-apps/