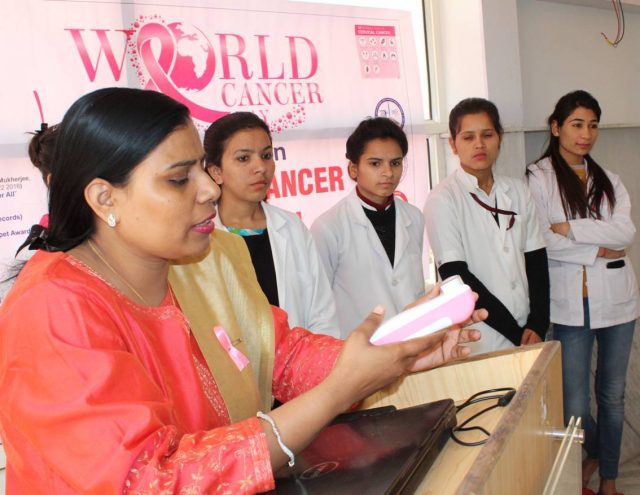 By OUR STAFF REPORTER
Dehradun, 4 Feb: On World Cancer Day, NGO SHEWA organised a Cancer Awareness Talk at Sanjay Maternity Centre, here.
It was stated that one woman died every seven minutes of cervical cancer. Breast cancer claimed one life every 10 minutes. In 2025, these cancers will kill one victim each in 4.6 and 6.2 minutes, respectively. One-fourth of women in the general population had breast-related problems, hence the need for awareness, said Dr Sujata Sanjay.
She declared that cervical cancer could be fully prevented if there was the required awareness. The tragedy, however, was that, because of lack of knowledge and an it-cannot-happen-to-me attitude, it is the most common kind of cancer in India today. “It’s tragic that cervical cancer mostly hits the young population – young women, women with growing children – whose lives seem shattered after they come to know of it. But the most important thing to understand is that it is completely preventable and, therefore, all you need is awareness to protect yourself from it,” she added. “Today the state of cervical cancer is such in India that it accounts for the largest proportion of women deaths in India, apart from breast cancer. But still there is no awareness.”
Cervical cancer occurs because of a viral infection, caused by the human pappiloma virus (HPV). “The incidence of cervical cancer is higher in rural areas than in cities. In cities, breast cancer is very common. Herpes is a cause for cervical cancer. Then again, bad local hygiene, too many children, not enough spacing between children, low nutrition levels and early marriage all contribute to the risk factors for this kind of cancer,” said Dr Sujata.
Because the awareness level in Cities is considered to be higher than in smaller towns and villages, and people there have better access to resources, the number in metros are seen to be less. “However, some women – no matter where they are – are more vulnerable than others. The high risk group includes girls who have had premature sex as teenagers, those who have had multiple pregnancies or multiple sex partners and don’t use contraceptives,” she said.
“A Pap smear test, even if it’s done once a lifetime, can save you from cervical cancer. If you are in the reproductive age group, regular check-ups with your gynaecologist, even once a year, is a must,” Sujata said. Menopausal women are also not completely safe from cervical cancer, as seen in certain cases; hence it is always advisable to go for a check-up. Vaccination against HPV at an early age is the best way to prevent the disease, doctors add. Not all types of HPV are carcinogenic, and HPV types 16 and 18 contribute to 70 percent of the cervical cancer cases. Early screening and greater awareness about breast cancer has made a difference, whereas in cases of cervical cancer there are differences of opinion about treatment and preventive measures. For instance, though there is a vaccine available to prevent cervical cancer, its use in India remains limited given high costs and concerns about its efficacy and long-term safety.
“In India, we need to promote preventive healthcare. There is a greater need of reforms in our health policies while dealing with a disease like cancer. Better treatment modalities and more targeted cancer therapies that minimise the side effects on the body have made several forms of cancers today curable, especially if they are detected in the early stages,” said Pratik, Secretary, SHEWA Society.