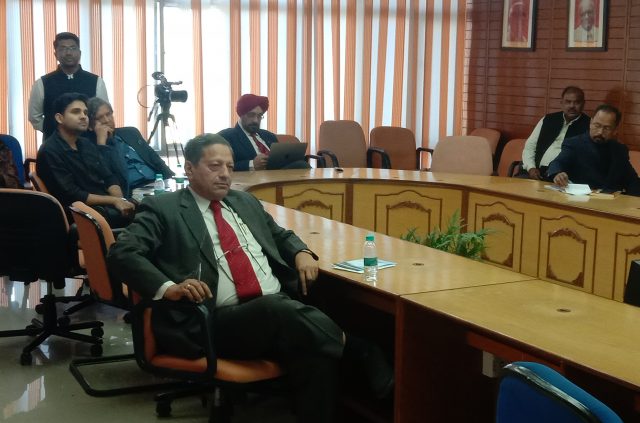 DEHRADUN, 20 Nov: The post lunch session on the second day of VoW Festival being held in Dehradun was mostly dedicated to Hindi literature. In the session, Rajeev Sharma spoke about his book, ‘Vidrohi Sanyasi’ which won the award in the category of Hindi Non Fiction. In his acceptance speech, Sharma said that his book narrated the life and contribution of Adi Shankaracharya. He said that though, the book had been written in a spontaneous way, it was based on lot of research and reading. He said that he traversed across the country to places that had been visited by Adi Shankaracharya from Kerala to Kedarnath, which proved to be the last journey of Adi Shankaracharya. He said that the award to the book was an honour basically to the great saint Adi Shankaracharya who was a real hero for the country, unlike many fake heroes being created by the market and other forces to fulfil their agendas. Shankaracharya was a real hero as he had laid the foundation of deep cultural roots that had lasted till the present times. He had united the country and the countrymen like never before or after him. He came at a time, when everything was in a mess and the people were deeply divided, and were losing touch with the great Indian civilisation. To write the book, he travelled to Kerala, Karnataka, Andhra Pradesh, Odisha and to Uttarakhand in order to get a direct feel of the life that had been led by Adi Shankaracharya. He said that he felt that it was not him that had written the book on Adi Shankaracharya but some unseen force had made him write the book. He said that he tried to write the book in way that could appeal to the readers of the 21st century. Alka Saraogi, who won the award in the category of Hindi fiction for her book, Kulbhushan Ka Naam Darj Ho, in her acceptance speech, said that prestigious awards such as Valley of Words Awards gave confidence to the writers and inspired them to write even more. She narrated that the book is based on a character named Kukbhushan who could not get rid of the effects of partition. Hailing from a Rajasthan village, his forefathers had settled in East Bengal but had to migrate once more after partition. Despite being poor and walking in broken chappals, he always appeared happy, searching however for his friend Shyama, a washerman who gave him a button of happiness but had gone missing since forty years. In addition, Jyoti Dhawan also had conversation with Rohan Chakraborty about his book Making Friends With Snakes and Rupa Bishnoi held conversation with Nancy Raj about her book It’s My Colour. Jaywanti Dimri had conversation with Damodar Khadse in respect of his book Naukarshahi Ke Rang and LS Bajpai had conversation with Padmaja Ghorpade in respect of her translated book Sanatan. Kavita Gupta was also in conversation with Dr Sushil Upadhyaya in respect of her book Ashwatthama. Mamata Kiran had conversation with Ashutosh Garg in respect of book Sitaayan.