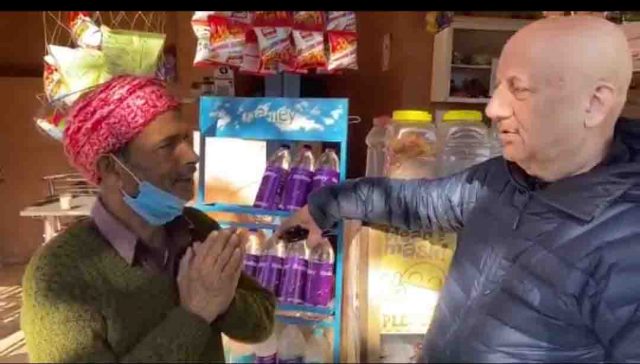 By Our Staff Reporter
Mussoorie, 18 Dec: The shooting of the film, ‘The Kashmir Files’, is ongoing in Mussoorie for which Bollywood actor Anupam Kher has come with his wife Kiran Kher.
Anupum Kher is enjoying the beautiful locations of Mussoorie, taking a moment out from shooting.
Anupam Kher went for a walk on Kempty Road and enjoyed a cup of tea at Semwal Restaurant. He interacted with the restaurant owner, Indra Dutt Semwal, and got to know about Mussoorie. Anupam Kher asked Semwal to fix the spelling of the word omelet on the menu board of the restaurant.
The shooting of The Kashmir Files is been going on in Mussoorie at various locations for the past one week. These included the Mall Road, Park Estate, Radha Bhawan, etc. Shooting will also take place at Sister Bazaar in Mussoorie Cantonment on 20 December. Kashmir Files is based on the story of Kashmiri Pandits. Mithun Chakraborty is also expected to arrive here for the 20 December shoot.
According to Landour Cantt Board Vice-President Badal Prakash, parts of the film have been shot in Mussoorie. Many scenes of the film have been shot in different locations including Mussoorie, Dehradun and Rishikesh.