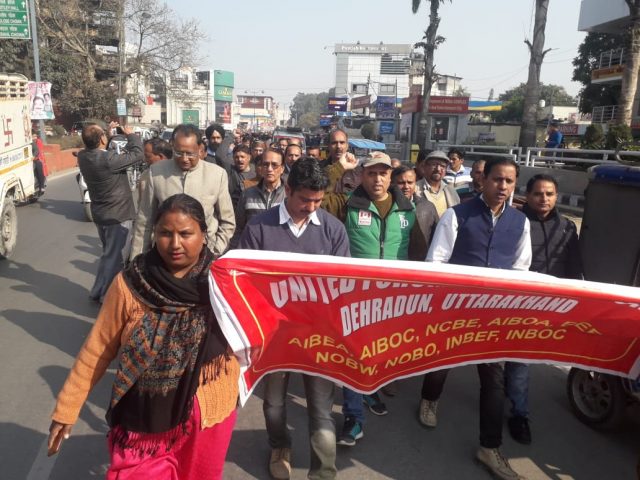 By OUR STAFF REPORTER
DEHRADUN, 26 Dec: At the behest of the United Forum of Bank Unions, over a million public sector bank employees held a nationwide strike today to protest against the proposed merger of the Bank of Baroda, Dena Bank and Vijaya Bank. The impact of the strike was felt in Uttarakhand, also. Bank employees took out a rally here and expressed opposition to the Union Government’s policies.
Bank officials and employees gathered at the Parade Ground, here, under the banner of the United Forum, held a demonstration and raised slogans against the government. They declared the merger plan an anti-public act, which would not be tolerated under any cost. Convenor Jagmohan Mendiratta said the strike was part of their protest. He said the earlier merger of banks with the State Bank of India had not solved the fundamental problem of growing NPAs. The new merger plan would lead to the closure of a number of bank branches and ATMs, which would affect customers adversely. A large number of workers would be retrenched. This was despite the fact that the government was giving licences to a number of small banks. He accused the government of failing to recover NPAs from large corporations. Earlier, protests had been held on this and other issues, but the government had come up with no solutions. The bank employees might need to go on an indefinite strike.
A number of other speakers addressed the gathering. A rally was also taken out that passed through Astley Hall, along Gandhi Park, Clock Tower, Darshan Lal Chowk, Lansdowne Chowk, and back to the Parade Ground.
Others who addressed the strikers were PR Kukreti, Hari Om Rekhi, RK Gairola, RP Sharma, BP Sunderiyal, Kundan Singh, Rajan Pundeer, Shardul Dhaundiyal, Murari Lal Nautiyal, Samdarshi Barthwal, etc.