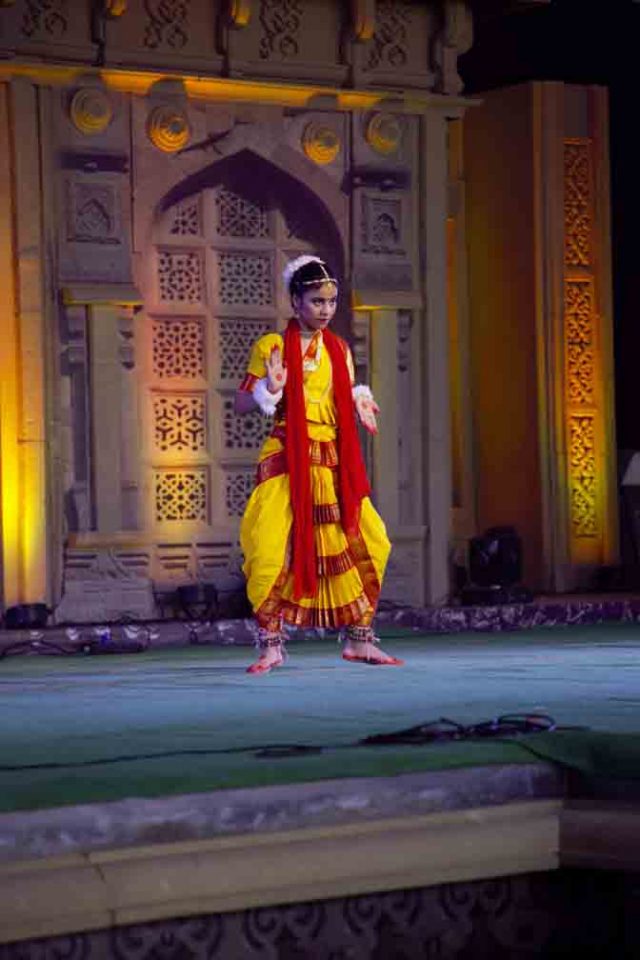 DEHRADUN, 15 Oct: Continuing the Virasat Sadhna, the fifth day of the Virasat Festival, started with performances by students of various schools, showcasing their talents with enthusiasm. Today’s performances included Kathak by Neetu Bhandari from Him Jyoti School; Hindustani Vocal by Ojasvi Painuli and Tabla by Ayushman Kumar Mishra; Hindustani vocal by Shresth Negi, and Bharatnatyam by Tushita Kulshrestha from Olympus High School. The evening’s performances were Kathak and Chhau fusion ballet by Swati Sisodia and Group from the North Central Zonal Cultural Centre. Chhau is a major classical Indian dance with origins in the eastern Indian states of Jharkhand, West Bengal and Odisha. It is found in three styles named after the location where they are performed, i.e., the Purulia Chhau of Bengal, the Seraikella Chhau of Bihar now Jharkhand, and the Mayurbhanj Chhau of Odisha. The dance ranges from celebrating martial arts, acrobatics and athletics performed in festive themes. The costumes vary between the styles, with Purulia and Serakeilla using masks to identify the character. The stories enacted by Chhau dancers include those from the Hindu epics the Ramayana and the Mahabharata, the Puranas and other Indian literature. The dance is traditionally an all males troupe, regionally celebrated particularly during spring every year. It is a fusion of classical Hindu dances and the traditions of ancient regional tribes. The dance brings together people from diverse backgrounds in a festive spirit. This evening the program opened with the performance of Shree Swati group, who performed Chhau to Shiva stuti, following which they performed ‘Shiva Tandav’. Shree Swati group and Mayuk and Abhishek group performed to the enthralling composition by Pt Birju Maharaj. The performances included Shikar, Kalli, and ended with Tarana. The performance was an amalgamation of Kathak and Chhau. The Shree Swati Group members were Avkash, Shefali and Shikha; while Mayuk and Abhishek group members were Mayuk, Abhishek, Teena and Asmita. This was followed by Thumri Gayan by Kumud Dewan. Dr Kumud Diwan is a renowned exponent of the Thumri genre of Hindustani classical music. She is a disciple of Padma Bhushan Pt Chhannulal Mishra of Banaras and she excels in Banaras, Gaya and Lucknow styles of Thumri. Pravin Godkhindi, then, gave a performance Hindustani Classical Flute. Pravin Godkhindi is fortunate to have his father Pt Venkatesh Godkhindi, an eminent vocalist and Bansuri Artist of the country, as his first and only Guru for Flute. His father has taught him Bansuri in Kirana Gharaana Gayaki style. But Pravin added the Gatkaari or Tantrakaari style by his own efforts and succeeded. Virasat Saadhna will continue at 10 a.m. on 16 October. At 7 p.m., there will be a performance of Ghoomar from Rajasthan. At 8 p.m., it will be time for Kahani Ghazal Ki, featuring Raza Murad, Chandan Das and Radhika Chopra.

Garhwal Post has established itself as a credible, balanced and forward looking newspaper in India. Based in Uttarakhand, the daily is read by the aware, socially and culturally responsible, high-income elite of society.
Contact us: info@garhwalpost.in
https://garhwalpost.in/bdsm-hook-up-sites/