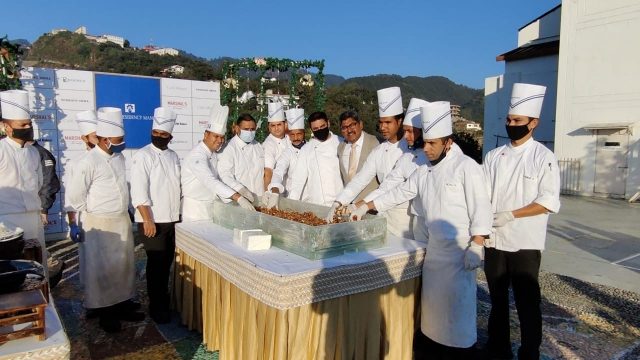 MUSSOORIE, 29 Nov: Christmas cake-mixing ceremony was today held at JP Residency Manor Hotel in Mussoorie and Christmas Carols were also sung on this occasion thus sounding the beginning of the Christmas festivities this years as the Christmas draws near. The cake-mixing ceremony, which has become an annual feature at JP Residency Manor, Barlowganj, brings back the nostalgic memories of Christmas festivities that used to start on 29 November, each year. The ceremony began with the Chief Chef of JP Residency Manor Tanuj Nayyar guiding guests about how to mix the ingredients, including black currant, golden apricot, rumsoaked figs, resins, dates, candied orange peels, candied ginger, dry cherries, tutti frutti, candied pumpkin along with rum and brandy to make a perfect Christmas cake. He said the traditional preparations for cake mixing begin a month before Christmas day. Anil Sharma, Vice-President Jaypee Residency Manor, Mussoorie, said, “Christmas brings people together in celebration and the cake mixing is organised keeping with the traditions. Eminent authors from the town, namely Ganesh Saili, Abha Saili, Rajesh Saxena and students of Nirmala School and many others attended the ceremony.