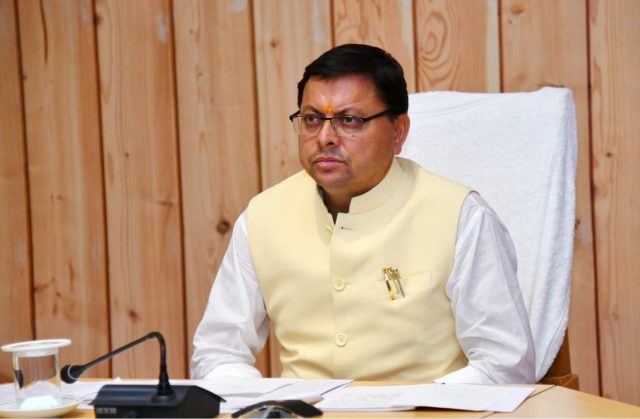 By Our Staff Reporter
Dehradun, 30 Sep: Chief Minister Pushkar Singh Dhami took virtual part in a programme of the PHD Chamber of Commerce and Industry on Thursday.
In his address, the CM underlined the importance of Industry in the development of a people and nation. He mentioned measures being taken to provide ease of doing business to industries of Uttarakhand. Every effort was being made to solve their problems, he claimed.
He recalled former Prime Minister the late Atal Behari Vajpayee’s special package for the state which had helped establish a large number of industries. He described the industrialists as brand ambassadors of the state in encouraging further industrialisation. The Investors’ Summit had considerably increased industrialists’ interest in the state, he claimed, as it indicated the positive climate for investment. He urged those present to spread the message of Uttarakhand as a desirable investment destination.
The CM said he favoured a continuous dialogue between the government and industrialists. He reminded that Prime Minister Narendra Modi has a special fondness for Uttarakhand. The Union Government was providing all necessary support for expansion of connectivity by road, rail and air.
Present over the virtual platform were PHDCCI President Sanjay Agarwal, CMD, ITC, Sanjeev Puri, Alok Kirloskar, Manish Bhatnagar, Pradeep Multani, etc.