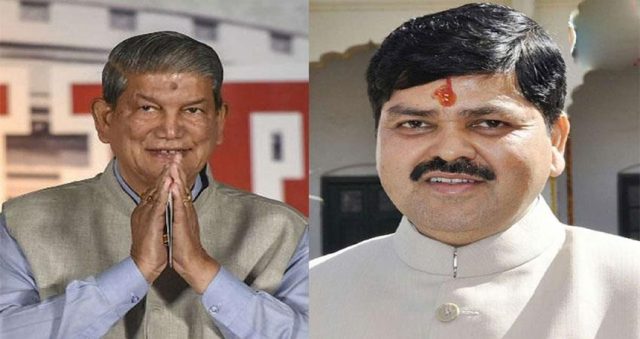 DEHRADUN, 20 Nov: Former Chief Minister Harish Rawat has accused the Dhami Government of meekly surrendering before the Yogi Government of Uttar Pradesh, in respect of division of assets and liabilities. He claimed that the State Government had surrendered to Uttar Pradesh in the matter of settlement of assets, adding that Congress would oppose the state government’s asset deal with Uttarakhand by launching an agitation against this surrender. He announced that Congress would observe 18 November as a black day. Former CM Harish Rawat, Leader of Opposition Pritam Singh and State PCC President Ganesh Godiyal jointly held a press conference at Congress Bhawan in Dehradun today. During this, Rawat fiercely attacked the Uttarakhand government. He said that Congress would organise a protest on the streets of the state in this respect and submit a memorandum to the Governor, expressing the opposition to the deal regarding settlement of division of assets and liabilities between the two states. The veteran Congress leader further asserted that the Congress party would also approach the court in this regard. Harish Rawat said that the Congress would soon call on the Governor in this matter and would also go to the Supreme Court. He categorically stated that Congress outrightly rejected this agreement. He said that during the period of Trivendra Singh Rawat government, a formula of sharing the assets in the ratio of 75:25 was adopted between the two states but now it was being said that survey of assets would be done. Former Chief Minister Harish Rawat made it clear that he intended to remain active in Haridwar for which he had been nicknamed Hardwari Lal by the BJP. Commenting on the withdrawal of new farm laws, he stated that Rahul and Priyanka Gandhi had rightly asserted that arrogance had lost and the democracy had won. He claimed that this was not an easy victory for the farmers as many farmers had lost their lives and only then this victory was achieved. Rawat claimed that the Chief Minister and others in the government were engaged in mining and that all the leaders of the BJP were involved in mining, Now the Chief Secretary had to come forward and issue an order against illegal mining. Rawat claimed that Delhi CM Arvind Kejriwal ought to first make his promises come true in Delhi and pointed out that in Delhi, the electricity was more expensive than anywhere else in the country. He asserted that his government had given the cheapest electricity in Uttarakhand. On the other hand, Rawat said on lifting the restrictions of Covid- 19 in Uttarakhand, the government had woken up rather late and it had lifted the restrictions only when the Char Dham Yatra was already over and no tourists were coming now to the state. He added that all Covid restrictions had been removed but there was no consideration of precautionary measures that ought to be in place.