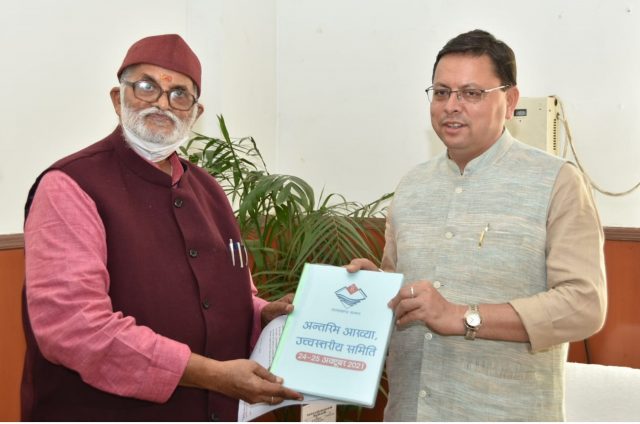 By Arun Pratap Singh
Dehradun, 25 Oct: Chairman of the High Level Committee constituted regarding Devasthanam Board, Manohar Kant Dhyani submitted an interim report to Chief Minister Pushkar Singh Dhyani, here, today.Dhyani had called on the CM at his office at the Secretariat to submit the report.
The interim report has been prepared by the Committee headed by Dhyani and it makes certain recommendations regarding the constitution of the Devasthanam Board to manage the Char Dham and allied shrines in Uttarakhand. It may be recalled that the then Trivendra Singh Rawat Government had set up the Devasthanam Board to take control of the Char Dham shrines, namely Badrinath, Kedarnath, Gangotri and Yamunotri, as well as over 50 other allied shrines in the state. This move was very strongly opposed by most stakeholders including the priests, the teerth purohits and an agitation was also launched against it. This was also seen by many as a move to wrest control of Hindu shrines in Uttarakhand by the government. The agitation continues even now.
When Pushkar Singh Dhami became the CM, the agitation was at its peak and this high-powered committee headed by veteran BJP leader and ex-MP Manohar Kant Dhyani was constituted by him. Though this move was welcomed by the teerth purohits and other stake holders, a statement issued by Dhyani had created some controversy. Dhyani had stated that the committee would be looking for ways to ensure that the Devasthanam Board did not adversely affect the rights of the stakeholders in any manner. The stakeholders who had initially welcomed the constitution of the committee under the impression that the committee would recommend dissolution of the Board, itself, were upset with Dhyani, who incidentally comes from a family of Teerth Purohits of the Char Dham shrines.
Soon after the formation of the Char Dham shrine board, the move was challenged by BJP MP Subramanian Swami in the Uttarakhand High Court, but he lost the case. The HC Decision has been challenged in the Supreme Court by Swamy, but it has not come up for hearing for long.
However, a recent statement by RSS Chief Dr Mohan Bhagwat that Hindu shrines be left to the Hindus to manage should be seen as strong advice to the state government. This statement was issued by Bhagwat while he was in Haldwani and, hence, assumes special importance. It remains to be seen if the interim report submitted by the Dhyani Committee takes cognisance of the advice. Dhyani is considered close to the RSS camp and whether his association will the pave way for dissolution of the Devasthanam Board remains to be seen. The final report is likely to take some more weeks, sources close to Dhyani claimed.
The Uttarakhand Pradesh Congress has already promised to dissolve the Board if it comes to power. Otherwise, too, this is a politically sensitive issue and has the capacity to influence the results of assembly polls in at least 5 assembly seats, admit BJP sources.