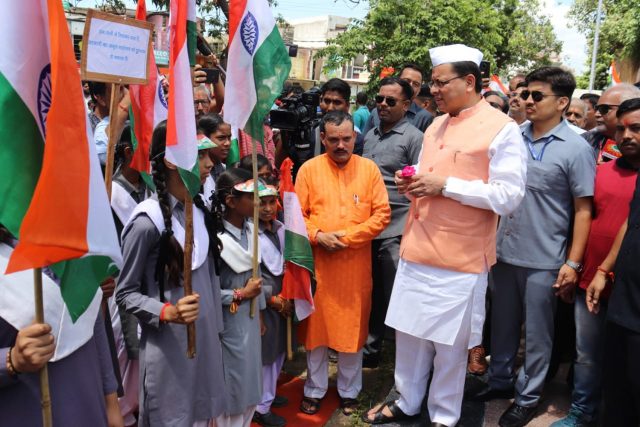 Khatima. 12 Aug: Chief Minister Pushkar Singh Dhami reached the Shahid Sthal in Khatima today to participate in the Tricolour campaign (Har Ghar Tiranga Abhiyan) on the occasion of Amrit Mahotsav of India’s Independence. On this occasion, the Chief Minister first paid homage to the martyrs of the statehood agitation by garlanding the portraits of the martyrs.

He also saluted the martyrs who sacrificed their lives in the defence of the country’s independence on the borders and internally.

The Chief Minister said that, under the leadership of Prime Minister Narendra Modi, programmes are being organised across the country to celebrate 75 years of the country’s independence. He said that the feeling of patriotism has been awakened within the country, and it is time for everyone to celebrate the Amrit festival of freedom. The next 25 years would be the Amrit Kaal for the country. For that, the people would have to be fully resolved. He said that the new generation would decide the new stages of progress in the country in the period of Amrit Kal. Prime Minister Narendra Modi has ensured that this work is taken forward. He has envisioned a prosperous, capable and powerful India. Dhami called upon the people to take a pledge for the all-round development of the country and the state.

Garhwal Post has established itself as a credible, balanced and forward looking newspaper in India. Based in Uttarakhand, the daily is read by the aware, socially and culturally responsible, high-income elite of society.
Contact us: info@garhwalpost.in
https://garhwalpost.in/az-matchmakers/ dating new ross matchmaker raleigh nc