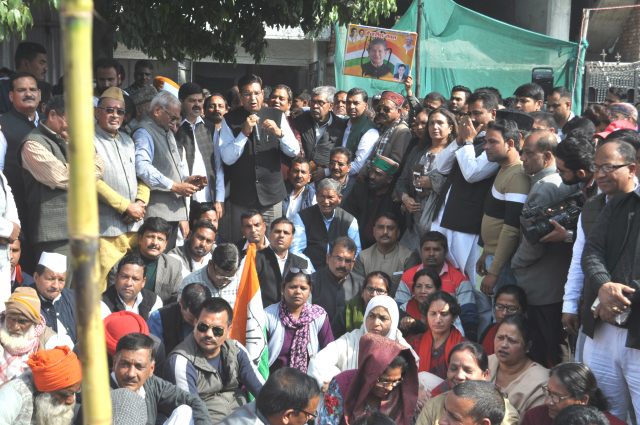 By OUR STAFF REPORTER
DEHRADUN, 13 Feb: Congress National General Secretary and former Chief Minister Harish Rawat staged a dharna near the Vidhan Sabha, today, to protest against the recent deaths from consumption of illicit liquor and the demand for payment of sugarcane farmers’ arrears by the sugar mills.
On the occasion, he said that the farmers’ were owed Rs 300 crore by the mills. The government was not concerned about their problems. He also described the government’s excise policy as a failure.
The Congress organised a protest, today, from the Vidhan Sabha to the streets. Party MLAs raised the issue in the House and created a disturbance. They raised slogans and entered the Well of the House.
According to his declared programme, Harish Rawat attempted to march with party activists to the Vidhan Sabha to undertake a ‘gherao’ but was stopped at the Rispana Bridge barricading by the police. They were holding sugarcanes in their hands as a symbol of their protest. Rawat and his followers then staged a dharna nearby.
Addressing the gathering, he declared the government a failure on all counts. He alleged the hooch tragedy was the result of the government’s flawed excise policy. He expressed confidence that the people would give a fitting reply in the coming elections. Also present were state Party President Pritam Singh, former ministers Dinesh Aggarwal and Mantri Prasad Naithani.