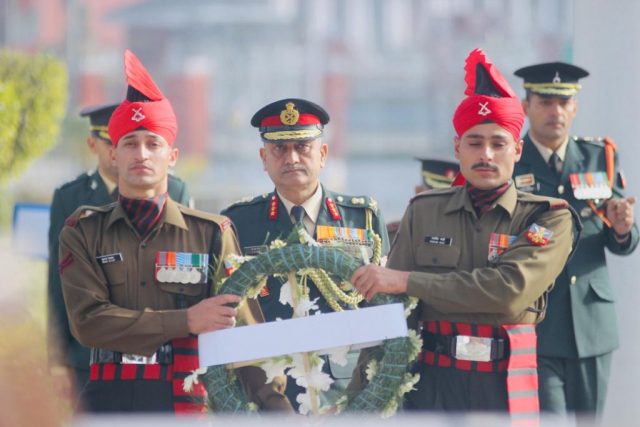 Dehradun, 1 Feb: Lieutenant General Jaiveer Singh Negi, PVSM, AVSM, YSM, VSM took over as the 49th Commandant of the Indian Military Academy, Dehradun on 01 Feb 2020. He paid tributes to the martyrs at the War Memorial.
The General Officer was commissioned into 16 DOGRA in Jun 1981. In his illustrious career spanning close to four decades, he has held many important challenging command and staff appointments in India and abroad. He has commanded his Battalion during ‘Operation Parakram’ in the Western Sector, an Assam Rifles Sector in Counter Insurgency Area in North East, a Division in High Altitude Area of Ladakh Area and a Strike Corps in Wester Sector.
He is an alumnus of the prestigious National Defence Academy, Defence Services Staff College, Army War College (Higher Command Course) and National Defence College. He has done instructional tenures at Infantry School, Mhow and Indian Military Training Team, Bhutan. He has also been the Deputy Commander and Chief of Staff of an Indian Brigade deployed in UN peacekeeping Mission in the conflict zone of Congo. He has tenanted important instructional and staff appointments in Infantry School, Mhow, Colonel General Staff of a Division, Military Secretary’s Branch and as a Maj Gen served in both Military Operations Directorate as also Military Secretariat Branch. He has vast operational experience and service experience having served in all terrains of the country.
For his dedicated and distinguished service of the highest order, he has been Awarded Param Vishisht Seva Medal, Ati Vishist Seva Medal, Yudh Seva Medal and Bar to Vishist Seva Medal. He has also been awarded the UN Force Commander’s Commendation for his distinguished service in United Nations.
Prior to taking over the reins of Indian Military Academy, he was handling a crucial appointment of Deputy Commander and Chief of Strategic Force Command.
The General Officer takes over the Command Baton of the most prestigious Indian Military Academy from Lt Gen Sanjay Kumar Jha, PVSM, AVSM, YSM, SM, who superannuated after four decade of distinguished service on 31 Jan 2020.